A ‘Joey’ Ride During Pandemic 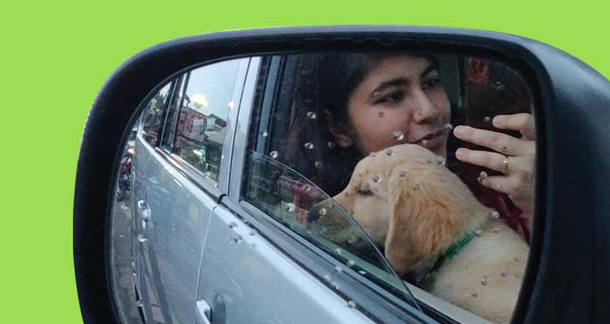 Travelling with a two-month-old puppy is such a tough row to hoe and on top of that travelling from one state to another during a pandemic – this is what made my heart beat a million times faster! I had prior experience of travelling with my Rottweiler, but my golden retriever puppy, Joey, was nothing like him. The pandemic had already made life exceedingly complicated with unbound constraints, fear, and uncertainty.

One fine evening, came the scary, sudden order of dad’s posting from Mhow in Madhya Pradesh to Jamnagar in Gujarat. I was already overwhelmed by dealing with my 2-month-old over-energetic and pampered golden retriever and to add on to my stress levels, I began dreading the 14-hour road journey with 7 people and one pup in a car, topped with the distress of following all the covid-19 protocols considering that 3rd lockdown was in action.

My preparations for our journey began one week in advance, beginning with veterinary visits to make sure Joey was ready to embark on his very first road journey. Fortunately, making him relaxed in the car was a cakewalk as he loved being there. We had to take limited halts, ensure social distancing, and travel along with carrying our food. The anxiety was crippling.

Our journey started with me being thoroughly packed with much more stuff of Joey than my own. Being as little as he was, in the beginning, he settled with me on the last seat but constantly kept hopping from backseat to the front one until he was bored enough to eventually snooze off in my arms. I have severe motion sickness, which increases when I am sitting on the last seat of an SUV but Oh! Things one does as a mom – ‘Baby dog before self’ was definitely my motto! Joey was named after the character of Matt LeBlanc in ‘Friends’ and trust me, my fellow pet parents, I have never come across anyone justifying their name as my doggo. He lives to eat and chew on anything edible. With this, I come to our first milestone. Travelling in times of a nationwide lockdown, we had to eat our meals in the vehicle itself. Joey would not let anyone of us eat peacefully; he would keep barking and jumping on the person who had food like a greedy little monkey. Regardless of Corona, we had to take breaks to bring Joey down; he, being a two-month-old puppy – how long could one expect him to hold his business?

Moving onto our second milestone, though Joey was fond of being in the car, he was quite alarmed by the commotion of traffic. I got him out but he went on climbing my legs as disturbance of vehicles crossing us startled him to bits. We had no alternative but to search for places where we could walk him away from main road so that he could peacefully handle his business.

Our third milestone was to make him understand the dearth of space in the car with 7 people, luggage, and a puppy but all he wished for was to play and bounce as was his general routine in evenings. When he was unable to do so, he started getting irritated and anxious. Kiddos, I tell you!!

It was incredibly hot that day as we were travelling in June, but giving in to Joey’s demands, we had to roll down the window after every half an hour for a short peep as he began scratching it and wanted to look outside. One must always keep in mind to keep your dog on left side of the vehicle while gazing out of window and drive with caution during that period. I was completely exhausted but Joey wouldn’t let me shut my eyes one bit; being an absolute momma’s boy since day one, he wanted my whole attention to be on him and did not leave me even for a second.

While travelling with a young puppy we must be vigilant about a few things:

One advantage of travelling with a puppy is that they go to sleep easily, which was our only solace that day. Joey was exhausted by the evening and post his evening meal, he slept off till we reached our destination. One would speculate that travelling with a large dog is troublesome but here my li’l one whirled and twirled the whole car upside down with his super enthusiastic activities. We reached our guesthouse at around 10 p.m. and Joey was recharged with energy through all his sleep. How I put him to bed again is a story for another day!

*Author is a 23 year old political science graduate, a teacher, a passionate dog parent, and a content writer, who finds solace in being surrounded by dogs and books at all times in life. Her blog ‘Paint it Olive Green’ represents her personal life experiences in the military surroundings, as a student and a dog parent. For any guidance on dog parenting, she can be reached on her dog blogging account on Instagram @dogistaan.