A MONSOON WITH A PURPLE-RUMPED SUNBIRD FAMILY 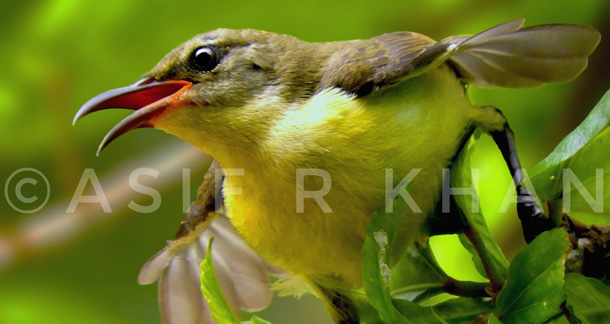 In the middle of your busy day, have you ever noticed, for a few minutes, a road-side tree? Or your neighbour’s garden? Or your backyard trees? If not, trust me, you are missing some amazing moments of your life. Every day, so many colourful events are happening in our surroundings and unfortunately, we humans are ignoring them.

During last monsoon, one day I was walking in my backyard; I was trying to photograph insects in Hibiscus flowers. Suddenly, I found a bird-nest in the Hibiscus shrub. It was a small hanging nest; it was a nest of a Sunbird. Without delaying anymore, I left that place, trying to observe the nest from a distance. After a while, a beautiful female Purple-rumped Sunbird arrived with nesting materials in her bill. I didn’t try to photograph her; I didn’t want her to leave her nest in fear because of me.

[Nesting photography is unethical and very harmful for wildlife; I started photographing them after the baby-bird started flying]

Mom Sunbird was contributing maximum efforts in nesting activity. She mainly used cobweb and dry-leaf as nesting material. Though Dad Sunbird didn’t make much effort during making of the nest, but always tried to stay close to his partner.

After the nest was made, Mom Sunbird laid eggs. There were, probably, two greenish oval-shaped eggs. Incubation period was almost two weeks long, and then Dad Sunbird started showing his responsibility. He was giving his almost everything for incubating their eggs.

After almost two weeks of incubation, I found a cute featherless baby bird trying to peep out from the nest. Dad Sunbird became busier. Feeding a baby Sunbird was not an easy job. The baby bird was always hungry, always crying for food. Dad Sunbird strived hard to feed their baby without taking rest. Though Purple-rumped Sunbirds are nectar eater, but I observed that at a few instances, he was carrying small insects in his bill for the baby [Probably protein is very important for fledging activity of a baby bird, dads know everything]. Baby Sunbird took around twenty days for its complete featherless-to-feathered transformation.

One night it was raining heavily. I was much tensed, thinking about my neighbour Sunbird family. Next day in the very early morning, I ran to my backyard, I found the nest was fine, but empty. I was shocked and tried to find the baby here and there. Suddenly, I heard a bird call, a very familiar bird call.  The baby Sunbird was calling from somewhere.  I found that it was sitting on a perch of the hibiscus plant. OMG……. Baby had learned to fly!!!

That day, I clearly observed the baby-Sunbird for the very first time. It looked like a cute sugar ball. Though it was completely feathered but the feather was dull in colour. I felt that the baby was very quiet; it became active only when it saw its parents coming with food.

Day by day, the baby became more active, as well as hungrier. Mom and Dad were constantly trying to feed the baby.

I was trying to identify its gender, but couldn’t. The whitish feather of neck region of the baby Sunbird was rapidly getting replaced by yellowish feather and the wing feather was getting darker in colour.

It took almost eight to nine weeks to identify the gender of the baby Sunbird. He was a male Purple-rumped Sunbird. The brownish wing feather, yellowish neck feather, and the purple-rumped feather of the baby were indicating its gender. However, some juvenile feathers remained in the head and neck regions.

At that time, the juvenile Purple-rumped Sunbird became semi-independent and always tried to drink nectar from the Hibiscus flower by himself. Though, still he was surviving under parental care.

I found that it takes almost three months for the complete transformation from a Purple-rumped Sunbird egg to an independent Purple-rumped Sunbird. I am fortunate that I got an opportunity to observe this complete journey. In this Monsoon, I have found some Sunbird couples flying together in my backyard. Now, I am really waiting for another chance to witness the magical moments again.

*      The author is a passionate birdwatcher and wildlife blogger from Canning, a small town near Kolkata, India. He has completed his Masters in Life sciences with Ecology specialization from the Presidency university, Kolkata.