An Insight into a Dog’s Behaviour & Psychology 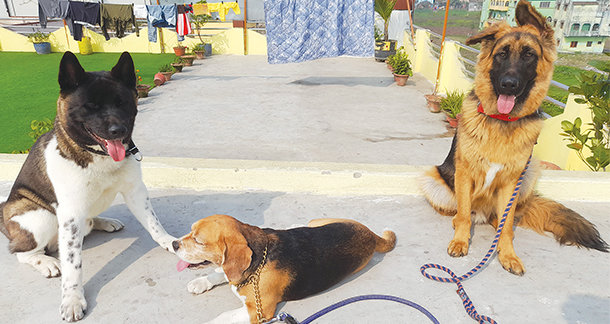 The human-canine relationship is truly unique in its kind. But just like any other relationship, it must have a strong moral foundation, which simply means, we as humans must always gain their trust and respect first and then they give us a beautiful gift called loyalty.

Just like any other animal species, dogs have a natural way of communicating with the world. Dogs, when they are born, have their nose open so they learn to navigate around the world through their nose first. Typically, around ten to fourteen days later, they slowly start to open their eyes and three weeks after the birth, their sense of hearing finally kicks in. So, a dog learns to communicate in a natural order – first, using their nose to pick up the scent, then their eyes to determine their field of view, and lastly, the ears to evaluate different frequencies of sound, and accordingly they express themselves to their surroundings.

On the other hand, humans have a completely different set of rules when it comes to communicating with each other; we usually tend to focus more on verbal and non-verbal interpersonal responses. And since, most of the humans tend to behave exactly the opposite of what a dog expects us to behave with them, what we get is an overly excited pooch jumping all over us and eventually wrestling us to the ground, and even more embarrassingly getting humped all over.

It is very important to understand certain things from a dog’s perspective. So, whenever you greet a new dog, it is best to let the dog figure you out first through its nose rather than having a loving gabfest with the dog. Quite amazingly, sixty percent of our dog’s brain is controlled by its nose and merely fifteen percent by the eyes. So, by recognizing us as a scent first, it becomes a more calm and trusting way of relating with a dog. By following such sequence –in the order of nose, eyes, ears – would certainly help them to see that you are truly well-versed their communication pattern and at the same time you are also being respectful about its natural and profound way of communicating with us.

Just like humans, dogs are pack oriented species. They like to live in social groups and are dependent on each other for primarily protection and survival. When we bring a dog in our home, whether there are other animals in the home or not, the entire family becomes part of its pack. So, understanding the ‘Pack Mentality’ of a dog is just as important as nurturing, caring, and showering your pup with all the love and affection in the world.

Interestingly, a dog’s mother begins training its puppies from birth. She sets clear rules, boundaries, and limitations for them right from the puppyhood. For an instance, if we observe our beloved Indies, how they interact with each other in a social group, we will always find that there is one who is considered to be the top of the pack, sometimes referred to as the ‘alpha’. So the pack looks to that individual member for leadership, structure, and protection. However, it’s really unfortunate that most of the gen Z dog experts don’t really understand the significance of this fundamental concept of canines. Just like any other social animal, for both dogs as well as humans, it is innate and natural to need leaders and leadership to identify, understand, and refine our purpose in life.

The biggest misconception people have about leadership with dogs is that they believe they have to be mean or rude to their dogs but it’s simply the opposite, it’s about guiding or showing them the right way, in order to achieve balance and harmony in each other’s life, like a responsible parent would do for their loved ones.

We all know that dogs are great role models for humans because they don’t discriminate when it comes to leadership. They will always follow the strongest leader.

For instance, one of my empathetic clients had a big old German Shepherd, a Beagle, and an Akita. Quite hilariously, both of the giant powerful dogs (German Shepherd) were led by this Beagle. He was like this AcharyaKesari in every sense. But it felt perfectly normal if we see it from an animal’s instinctual point of view. The reason they chose to follow the Beagle is because the Beagle had a better sense of direction and obviously had all other leadership qualities. And it made so much sense that why these large dogs followed Beagle but didn’t listen to my client. Initially, I was reached out by the owners to train their German Shepherdand Akita since they were exhibiting signs of dominance and aggressive behaviour, but actually, I ended up teaching their human counterparts as to why leadership is so essential in a dog’s life.

I get to work with cases usually labelled as ‘killer dogs’, ‘extremely aggressive’ or even worse as ‘psychotic’. And before they approach me, the owners had already tried their best to get help from every other canine professionalthat is available. According to the professionals, these would be the ‘lost cases’, no hope or they would surrender before even trying. So finally, when I meet with the dog, it turns out that he’s just an insecure little pup and thus misunderstood.

In my experience, the major cause of misbehaviour in dogs is that the dog is not being given a proper direction on a daily basis, and is physiologically and psychologically never fulfilled due to lack of exercise or mental stimulation. Basically, like every other being in this world, dogs do need a purpose in life.

And after so many years of working with such difficult cases, I have learned that if one can positively project their intention and desire through their real strength and honesty, then they are capable of achieving anything and everything with their beloved dogs.

* Author is an ardent dog lover and a behaviourist. Dogs have always been an indispensible part of his life; their degree of companionship, trust, love, and beneficence transcends beyond everything in this world.

Preparing Your Pooch for Your Baby

By Roohi Kulkarni Kale*Congratulations! You are soon adding a new member to your family. It is a happy yet overwhelming time preparing for the little one, while taking care of yourself. It is equally important to start preparing your pooch for the changes before the...
Read More

How to Discourage Chewing Behaviour in Puppies

By Dr. Jiyaul HaqueIt’s a common sight in most homes with pets exploring, chewing, and tearing on endless list of stuff like shoes, sofa cushions, pillows, gadgets, and appliances. It is normal for puppies to be mouthie as it is their way of exploring new things....
Read More

Tips for Apartment Training your PUP

"You’re not done training the dog, until you can trust him at liberty." - Chad Mackin Got a new dog? Living in the city? And now you have a brand new excitable puppy in your apartment and feel a bit anxious about handling it? Here are a few tips that you can take to...
Read More