“AND THEN WE WERE THREE” 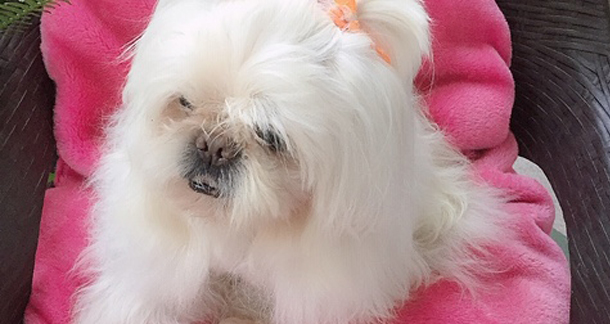 The year was 2012; Delhi was engulfed by torrential rains.

There was a bell on my door. I was expecting Binu’s driver to come with a small dog who I was told was 3 years old and was up for adoption. My job was to take his picture, circulate on social media to expedite his adoption.

On opening the door what I saw was horrifying. There was a man standing with a white furry dog, both of them were drenched in rain. He handed me the drenched ball of fur. His leash was in tatters, his paltry belongings, two filthy bowls, a wet and soggy vaccination diary, and a comb was handed over to me.

I asked the man –“Why is the dog drenched? Was he not in a car?”

To which the man replied – “No ma’am, we came in an auto rickshaw.”

Man – “You please speak to my madam, she will tell you.”

Me – “What’s your madam’s name and phone number?”

He mumbled a name and a phone number, which I quickly saved only to find out later that it was a wrong number.

I found myself helpless in a situation like this; this furry ball came and sat on my feet. He looked very sick and uncertain, his big black eyes, hidden under a lock of hair, were following me all over the house. He refused to leave my side even when I was in bathroom. I still did not know his name. On opening the vaccination diary, I discovered his name was Tango. He was not 3 years but 6 years old, the breed name was Shitzu. The only good thing was that he was vaccinated properly. So here I was with Tango, a white shitzu, having no idea what to do with him. By evening, I realized that Tango has been permanently abandoned by his owners, there was no trace of the man who dropped him, and the phones were either shut or unresponsive.

Hallelujah! Bringing home another baby was the most unlikely thing my heart could tell me, and here he was a sweet innocent baby nowhere to go. What do I do now?… that was a big question.

Amongst this entire hullabaloo, my constant confused companion was my other baby Sikander. He was curious but not jealous! Sikander is my little Pekingese, who is the center of my universe. He is intelligent and very kind hearted, not for a second I got a bad vibe from him for Tango.

My stress levels were very high by evening and the rains were torrential; there was no sign of Tango going back to his owners. As I started patting his furry body, I realized that his whole body was full of millions of ticks. He was smelling very bad due to big bloody boils all over his body, being camouflaged by his long white fur.

I was getting very worried, thinking that he might infect my precious Sikander. At this point, nothing seemed right. I called Binu. She was shocked at the way Tango had been banished from his home. Being an animal lover and my dear friend, she rushed to my home and we decided to take Tango to a senior Vet, Dr R., and to a spa before the sleep time set in. Three hours later, with a spick and span Tango who looked like an angel in disguise, we returned home. Oh yes! I also got him a new leash and bowls.

On our way back from Vet,Binu and I discussed of getting baby Tango adopted within a week.

The next ten days were a whirlwind of activities. Tango decided never to leave my side, his big black eyes followed me everywhere. He wouldn’t sleep for the fear of losing sight of me; he slept on my pillow for the duration I rested. For him, I became his world. He seemed very insecure; I could see the terror in his eyes. He treated me as a saviour and decided to bite everyone else. His biting habit was unpredictable! Within two days, he bit every staff and family member. His solace was me and everyone else was his enemy. The family was turning against him. Every human, Tango came in contact with, was going for their anti rabies vaccination. This was clearly an act of defence for the little brat.

Now the prospectiveowners started streaming in to check baby Tango out for adoption. My house was leaking due to rains. The whole exercise of calling people in a leaky house was embarrassing. Interviews started, and strange questions were asked of me.

“How many times will he pee and poop?”

“How many times does he have to go for his walk?”

“Will he adjust with my work life?”

“My parents are old; I want him to give them company. Will he?”

“Will he stay locked when I go out?”

And the most frequent one was

“Is he a dog with adjusting temperament?”

‘Will he?’, ‘Won’t he?’ was getting on my nerves; I held my thoughts to myself to these meaningless questions. How do I know the answer to these questions? Biting and eating seems to be his hobby. Can’t he just be loved for who he is?

I interviewed 40–45 prospective owners; all of them wanted him to adjust and no one was willing to adjust to his moods. I started refusing them. One of them seemed decent; he took Tango in the afternoon but by the next afternoon sent him back because he pursued his hobby at his new owner’s home too.

Two weeks passed and no one was fit enough to be Tango’s parents as per the standards set by me. Binu was of the opinion that I should not be nitpicky, but I was being one because I was falling head over heels in love with this little mad creature. Finally, a family decided to give him a permanent home. With a heavy heart and rolling tears, I drove to South Ex from Panchsheel. I took chicken, his vanity kit etc. with me to the new family. This lady and her two daughters were kind and full of love for baby Tango. A visit that would have lasted for ten minutes extended to 3 hours. As I sat there sobbing, I realized that a huge dark cloud of guilt of leaving tango with someone was looming over me, and I realized that I will not be able to ever see him again. As if by an act of god, I just picked up Tango, hugged him, and told the lovely lady that I am his mummy now. She asked her servant to bring the chicken from refrigerator and very swiftly, I drove back home with baby Tango. He slept all the way home and I sobbed all this while. I went against everyone and decided to give him a home.

From that day onwards, we were three – Sikander, Tango, and Mummy.

Days became extra busy, Tango became my shadow. He either bit or barked at every human he encountered. To calm his nerves, I took him and Sikander on a vacation to the hills. I was strictly told by the resort manager to keep him locked in the room or leave the resort. Obviously! Tango decided to bite two members of their staff, and got into a very bad fight with one of their horses.

During winter break my daughter came home from boarding school. She was his favourite target; she vainly tried to befriend Tango, but failed miserably.

There were only two constants in his life – brother Sikander, whom he looked up to for guidance and loving mummy because he knew that in mummy’s eyes he is above all crimes.

At the end of third year of Tango’s homecoming, he started feeling comfortable. Binu took full credit for his endearing nature. In the year 2017, Tango and Bingo (his best friend) got married; it was a gay wedding with vows. Sikander was his best man and his wedding was a lavish affair with around 70 guests. I could feel a pure white angelic light emanating from him. He ate well, loved his walks and drives, he got sick a few times but bounced back. At the age of 12, he was diagnosed with heart valve malfunction, but he still kept functioning for the love of life. At the grand old age of 14, he was diagnosed with kidney disorder. He went into emergency 4 times in 48 hours, but bounced back to my relief.

All these years, Sikander has been Tango’s big brother. Tango prances around the house looking for mummy and food, his vision is limited, his memory is failing him, but he has embraced his sick heart and kidney, with grace and grit. He is a cute rascal.

Love is all there is…. Love heals!

We are threenow, and forever……

*Authoris a lawyer, a Spiritual psychotherapist, and is on working committee of Charpaws