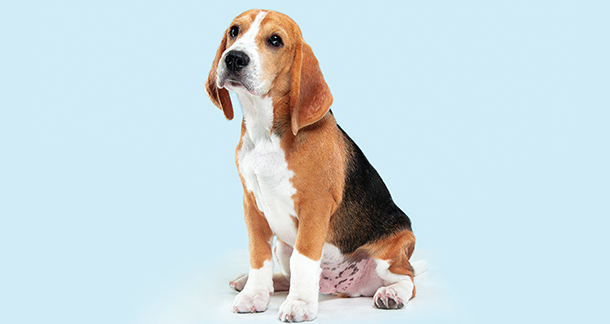 Gentle, fun-loving hounds with large, expressive eyes; long, floppy ears; and an upright white-tipped tail, who enjoy long twisty walks followed by some quality time spent with their owners… They are none other than our cheerful, affectionate Beagles! They are the happiest when following an interesting scent, so we can proudly say that their noses guide them through life. Curious to know more about them? Continue reading…

With long, droopy ears and big brown eyes, Beagle is a small to mid-sized hound breed. They have a slightly domes skull, with a muscular and solid body. Technically, there are two categories of Beagles: A smaller version weighing 20 pounds and under; and a slightly larger, 20- to 35-pound version. Majorly, they have a deep chest, broad nose, and squarish muzzle. All of them have a short, smooth double coat that comes in myriad of colours, frequently seen in a tricolour coat of black, tan, and white or blue, tan, and white.

Beagle’s friendly, playful, and optimistic nature makes it a ‘family favourite’ dog! If properly trained and socialized, they can be wonderful companions for children and other pets at home. It’s no surprise that Beagles are loud; they bark excessively if left alone. They are smart curious dogs, that wouldn’t obey your commands immediately, instead they would follow their nose and explore around. Their sharp sense of smell makes them the top choice for small-game hunters and they are often seen deployed as detection dogs searching for contraband at U.S. borders. It may require a lot of patience and consistent training sessions to train Beagles as they may turn stubborn at times.

According to the NBCA, beagle-like dogs can be traced back to reports in 200 A.D. England. Beagles descend from hounds used in packs by hunters on foot in England, Wales, and France. They were used for hunting rabbits and other small prey and were also used as gun dogs, flushing game for hunters. The breed as we know it didn’t make its official appearance stateside until after the Civil War when U.S. breeders began importing English beagles. Though still used in packs for hunting at some places today, beagles are more commonly seen as companion and family dogs. The breed was recognized by the American Kennel Club (AKC) in 1885 and is currently the seventh most popular in the U.S.

BEAGLE AT A GLANCE

Physical Attributes Boxers are stocky, muscular and powerful. They have regal, distinctly shaped square heads. Their jaw is undershot and the muzzle blunt. They have a broad, deep chest and a relatively short, strong back. Boxer's ears fold over naturally, but...
Read More