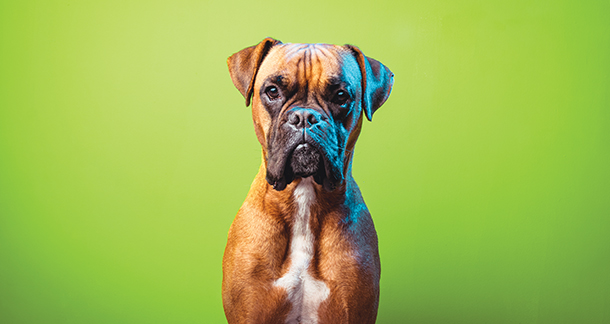 Boxers are stocky, muscular and powerful. They have regal, distinctly shaped square heads. Their jaw is undershot and the muzzle blunt. They have a broad, deep chest and a relatively short, strong back. Boxer’s ears fold over naturally, but traditionally, their ears have been cropped to stand erect. Their tails generally are docked and carried high. Their feet are compact and the toes are arched. The boxer’s coat is short and sheds moderately. Some boxers are a rich, fawn color and others are brindle. Their face or mask is usually black, but many have white face markings and white on the chest and paws.

Although Boxers may look grumpy, they are extremely playful and loving. A highly energetic dog, the Boxer frequently applies that enthusiasm to everything it does. A Boxer is moderately friendly to other dogs, strangers, and pets but extremely affectionate to its own family. The breed is well suited for active people, but it may be too boisterous for older individuals or the very young. The boxer has a high need for companionship and exercise. If these needs are not met, boxers can be destructive if left alone in the house. Few boxers bark excessively. If a boxer barks, chances are there is a good reason. Many boxers are vocal, however, and make a growling noise that’s really just the dog’s way of talking.

The ancestors of the boxer can be traced back thousands of years. But the breed began to take shape in Germany toward the end of the 19th century. Breeders downsized larger mastiff-type dogs—specifically involving a breed called the Bullenbeisser that had been used for big-game hunting. Some breed historians say boxers are named from the German word boxl, their slaughterhouse designation. Other fanciers contend the name boxer comes from the characteristic way that they use their forepaws to play, sparring much like a human boxer. Boxers were not imported to the United States until after World War I. After 1940, the breed rose to become among the most popular in America.

Boxers are considered working dogs. They were one of the first breeds employed as a police dog, and they have been used as seeing-eye dogs. But they are also bred to be companion and guard dogs, perhaps best known for being loyal family pets that are especially fond of children.

BOXER AT A GLANCE