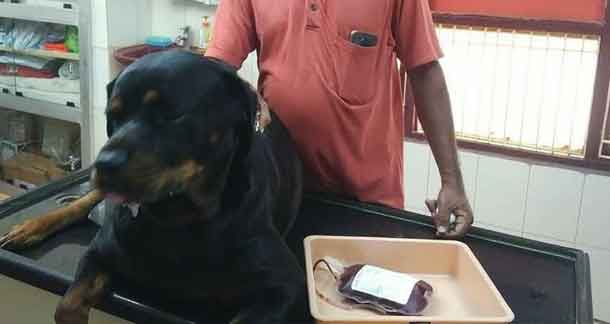 “Whoever saves one life, saves the entire world”

5th February 2018 – Will always be a day to remember. It was on this day, the Canine Blood Donors Group was formed.

Kaarthik Vaidun, the founder of now what you know as the Canine Blood Donors India group chanced upon destiny and started a public page on Facebook with the same name. The aim of this group was simple – to help canines and felines in need of blood! Slowly, the circle grew. He was joined by many other fellow trainers, veterinarians, dog and cat parents, and animal lovers, who were interested to be a part of this initiative. From a core group of just a handful people, the group made it to over 100 in a short span.

Having to coordinate over the phone and a varied set of people was a huge task – but with the phenomenal help it received, the group made it! What made it possible was the ‘like mindedness’. Hurdles came, no doubt, but that was just a minute part of the bigger picture that laid ahead.

Like the Oskar Schindler quote goes – “Whoever saves one life, saves the entire world.”

Requests for blood flew in from across the country. The group was practically inundated with so many issues that canines and felines faced. Yet, there was so less education and awareness about blood donation. Not much later, a WhatsApp group was formed, which can cater to such requests that are outside the reach of Facebook.

Blood in our culture is considered sacred. It’s something that’s very innate to every living being on this planet. As humans, we’ve seen how the blood donation in humans evolved. From being a myth or a taboo, how it transformed to be the most sacred act a human can do.

Blood donation in animals is a fairly new topic. Much like how it was when we discovered blood donation was possible amongst humans. It was and still is in some parts a feared thing to do. The question of harm to self, post a blood donation weighed higher than ‘it can save a life’.

Such is the situation with blood donation within animals. It’s a long way to go!

The core group huddled up and brainstormed how they could make a difference, how awareness can be spread, and how to double up the number of donors at hand. Social media handles began creating posts, videos, flyers alongside talking to pet parents and explaining the concept face to face.

Slowly, awareness started picking up. Not yet there, still picking up. There’s a long way to go before all of us are fully aware of such a beautiful concept.

The group works like a manufacturing site. Requests come in, they’re triaged based on blood reports, severity, and location; admins start calling up potential donors, donor gets found, donor is patched with the requester, blood is transfused, and finally, a life is saved!

Bi-weekly huddles are conducted within the admins to make sure all of them are on the same page; the technicalities of an animal’s health are explained, issues discussed, questions raised, doubts cleared, and the team gets ready for another battle to be won.

A regular day in the life of these admins is filled with understanding and discussing blood reports before each go their way to find donors.

The Mission and Vision:

The mission was plain and straight – to save a canine or a feline’s life by donating and transfusing blood. All this to be done on a volunteering basis.

When you have a group of over 100 people, there are always chances for the topics to get diluted. Hence, regulatory measures were taken to ensure the group talks and only talks about blood donation or blood requirement. With the clear mission, the vision was to create more donors. That’s probably the mountainous task of all. Explaining, educating, making people aware that it is safe for their dog or cat to donate blood. Just as it is safe for us humans to donate. It begins by letting people visualize a world that is compassionate on all grounds, unconditional love showered, and selflessness attained.

While some may agree to volunteer, few others may not. The team spearheaded by Kaarthik stood as a rock to defeat the shock. The team went on, persevered in what they believed.

Currently with a database of over 100 volunteers – the team continues to spread awareness, show videos and photos of real-time blood donations and how lives are saved. The biggest roadblock identified is the lack of knowledge around the topic; having said that, the knowledge resources are scarce and not accessible by general public.

In spite of dire conditions, it is the feeling of being saved, the feeling of hope that somewhere, someone has lent their shoulders for you to rest your head on. It is this thought that drives the team further. The end goal is pretty far from where the team is, but they are sure someday it will be more than a feat achieved.

A canine donation is possible only when:

Just like humans, after a dog donates blood, ensure the dog is hydrated and fed well in order to recuperate and get back to jumping and being a happy dog!

Volunteering is synonymous with the world selfless. At the same time, it also resonates to a world where love and kindness reign supreme.

Do you want to be a part of this world? Can you make your dog a blood donor? If yes, then contact either of the people mentioned below or visit their page on Facebook @Canine Blood Donors, India (CBDI)

Remember, you may think it’s just saving an animal. But in reality, you are saving a whole family.

Intas – Expressions for a Healthy Life

Intas is one of the leading multinational pharmaceutical companies. The Animal Health Division of Intas primarily focuses on the well being of animals, their health, productivity, and performance. We got an opportunity to interact with the highly committed team of...
Read More

What started off with a small team, 10 years later is #1 Pet Retail brand in India. We could only do it with our customers and lovely consumers – pets! JUST DOGS was born on 16th January, 2011 with the vision to provide total lifetime care for every pet, every parent,...
Read More

NEWTON : The Center Of Gravity Of Our Lives

By Laxmi Iyer Motling* Being adopted as parents by Newton, we feel really blessed as welcoming this li’l fur baby has changed our lives for good. We've always heard people say that cats can live by themselves but we don't really agree to the same as Newton is more...
Read More