India is home to more than 700 fresh water fish that include loaches, cat fish, barbs, Channas (Snake heads), gobies etc. Most of the species are endemic to two places – the Western Ghats and the North East . Every year, new species are being discovered and named. Among all fresh water fish Indian barbs, Channa and Cichlid are famous globally and hobbyists around the world prefer to keep them in their aquarium. There are more than 1600 species of Cichlid which are found in the world, but there are only three species which are native to India. Interestingly, they all have a strong resemblance to Madagascan Paretropline Cichlids. • Etroplus suratensis • Pseudetroplus maculatus • Etroplus canarensis • Tank Size for holding the above species is an aquarium with base dimensions of 48×25 inches and for Etroplus suratensis 60×24 inches.

By nature the fish are thought to breed during the months of December and January, when temperatures are colder and high monsoon waters have receded; simulation of the change between season; can induce captive species to spawn. 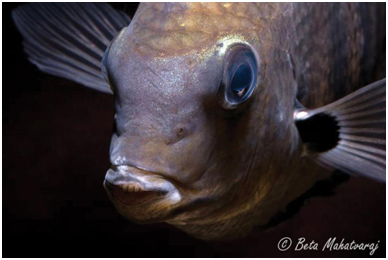 Etroplus suratensis (Green Chromide) are found both in brackish and freshwater bodies. They grow to about 12 inches in size. They are aqua cultured as popular food fish in the state of Kerala. Other than their size, they are good candidates for the home aquarium. During spawning time they lay eggs that are attached to a submerged log, rock or sometimes roots and weeds, in still or slow flowing water. Parents guard and fan the eggs until hatching, which usually takes about 4 days. The fry shoal around their parents during the first few weeks of growth. Parents refrain from feeding from the time of spawning until the fry become independent

Etroplus maculatus (Orange Chromide) are found both in brackish and freshwater bodies. In many locations they are found along with suratensis. They grow to around 4 inches in size. The males of this species exhibit a strong orange coloration when they are breeding. There is a selectively bred aquarium strain called the Tangerine chromide, spawns in shallow water, on a soft depression excavated by both parents. About 200 eggs are laid that hatch after 5 days, during which time the parents tend, and if necessary fan them. One parent always remains with the eggs while the other forages. Fry are guarded by parents until they almost reach sexual maturity.

Pseudetroplus maculatus (Orange Chromide) pair with fry in the Western Ghats stream. Etroplus canarensis (Striped Chromide) are restricted to the Netravathi and Kumaradhara River. These are only found in Freshwater. They grow to around 4 inches in size. The substrate is mainly composed of small rocks and leaf litter with some tree roots projecting into the water along one margin while other fishes included Puntius Mahecola, Pristolepis Marginata, Garra Mullya, Devario Malabaricus, Carinotetraodon Travancoricus, Rasbora Daniconius, and Barilius Gatensis. 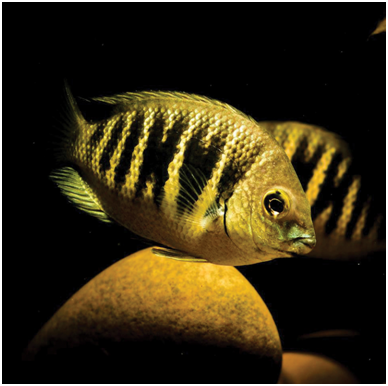 * Sundar Rajan is the proprietor of Filial Aquatics based at Madurai in Tamil Nadu. He has pursued the hobby of ornamental fishery for more than 18 years and has been a professional aqua scaper and blog writer for the past 8 years.