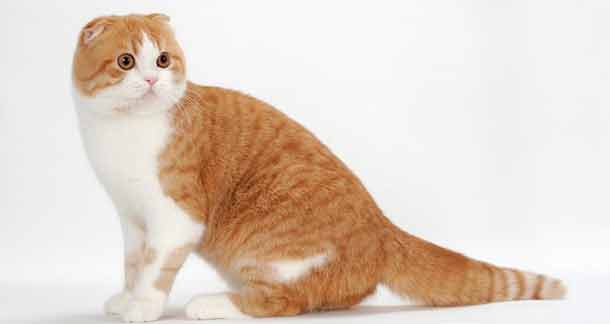 The Scottish Fold
This breed is also known as an owl in a catsuit since its folded ears impart an owl-like look to the cat. Known for its unique ears which have one or more folds the Scottish Fold is a good-natured, calm and affectionate cat. It has an average lifespan of 15 years and weighs anywhere between 6 to 13 pounds. It enjoys the company of family members and children. Scottish Folds have large eyes and a kinked tail that lacks flexibility. Their coat is short and dense with either very long or very short hair. These cats come in various colours and are marked by a well-rounded face and body accompanied by a sharp nose.
The Scottish Fold is an intelligent breed and can quickly adapt to new people and environment. They love human company. These cats prefer to stay close to their owner and sleep flat on their back.

Scottish Folds are soft-spoken and sweet-tempered and love to curl on their owner’s lap. They thrive in large, active households and enjoy the company of children and other pets. They are highly adaptable and make great travelling companions. These felines are natural-born charmers and love spending quality time with their owners. They, however, aren’t overly demanding and don’t mind being called couch potatoes.
If you own a longhaired Scottish Fold, you should comb his coat at least three to four times a week to maintain a vibrant and healthy look. Regular grooming is required for these cats as they tend to build up ear wax which must be cleaned at least twice a month.

The Abyssinian is nicknamed the Runway model of the feline world, because of its beautiful long, lean and muscular body and legs. It has many admirers and is characterized by large, expressive almond-shaped eyes, pointed ears, and an eye-catching coat. The coat contains a ticked pattern and comes in a variety of colours including blue, chocolate, lilac, cinnamon, and fawn.

The Abyssinian is highly active and attention-seeking. It loves to cuddle and curl in its favourite human’s lap. Abys are incredibly talkative and like to perch on shoulders. They are ideal for households with children and get along with other pets. These active, adventure-seekers make great companions and are curious. They often mimic the actions of their favourite people. These cats are great sprinters and can soar up to a height of about six feet.

Abyssinians demand a great deal of attention and love to play. They may get destructive out of boredom and may resort to different attention seeking tricks. This cat sports the jungle look and its thick shorthaired coat requires minimal brushing. These cats rarely need a bath.

Anshul Kapoor loves to observe and write about animals.