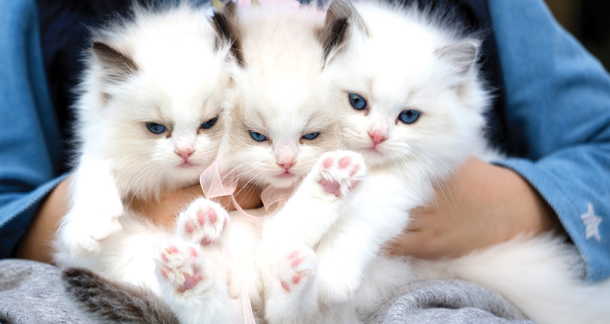 Socialisation, or introducing the kitten to its social world, usually lasts for six weeks from the second week of life of the kitten to the eighth week.  This is a crucial period in the developmental phase of the kitten’s brain and early influences determine what kitty grows up to be.  Cats on the whole tend to be a little more timid and nervous in nature when compared to dogs.  However, the experiences that the kitten has during its early weeks are significant in shaping her impressions about the world as a friendly or unfriendly place. Experiences gained during the socialisation period are carried over to adulthood; if these are negative she will grow up to remain threatened, nervous and suspicious throughout her life, expressing her feelings as behavioural problems in adulthood.

How do you go about socialising kitty?

Socialisation takes place ideally between four to eight weeks of age. It should be a gradual process that takes place every day.  Each day should have just one small session so that she is not overwhelmed. Cats have differing temperaments; some need to go a little slower when compared to others. You should watch kitty carefully for any signs of discomfort and slow your pace if you feel she is uncomfortable, adjusting the  socialisation exercises to suit her.

Your kitten will be handled by a variety of individuals including children, adults and of course the vet.  It is important that she is introduced to all these situations or simulated versions of these during the period of socialisation.  Different kinds of people that she is likely to encounter on the home could include the different genders, ideally a male and a female, and different ages from toddlers, young children, teenagers to elderly members of your family. Keep each introductory session short, for fifteen minutes.  But if Kitty displays signs of apprehension or discomfort, you should curtail the session and have a redo the next day.  While adult female and male handlers could make their entry by the second week, the elderly, toddlers, younger children between 5 and 12 and teenagers should ideally be introduced by the fifth week.

Simple handling activities such as having her restrained in your hand, holding her head, having a look at her next, stroking her over the back from the neck to tail and touching her legs and paws should begin anytime from two to eight weeks of age. Getting her used to being away from her litter mates for brief moments of upto two minutes is also an early socialisation training exercise.  Other exercises that should be begun by five weeks include activities that she would experience during a visit to the vet such as being lifted up and being held, having her mouth opened and examined, having a look at her paws, and lifting her tail. Training her to get accustomed to wearing a collar and having it removed should also be attempted after the forth week. Getting used to being groomed –with a soft brush for that matter- should also be initiated by the fifth week. By the sixth weeks she should be introduced to be taken in a cat carrier into a car as well as getting used to being gently restrained on a table.

The hullabaloo- introducing the sounds

Cats have a tendency to get scared if they hear unfamiliar sounds. In order to ensure that your kittens do not develop sound phobias, they should be introduced to commonly encountered household sounds. You could use recorded sounds for this purpose.  Ensure that the recordings are as realistic as possible.  As a precaution, first play the sounds on a low volume, that is barely audible, and slowly increase the sounds as the kittens play around. Before you actually play the sound in the room, with the kittens, you should have tested it out so that you are able to adequately modulate the sounds and the kitten is not frightened by any mistakes that you make in adjusting volumes.  The kittens should be exposed to low volumes of the recorded sounds once daily so that gradually, they get accustomed to hearing them. In all cases, you should keep watch over the kitten and see how they react to the sound.  If they appear alright, you can leave them to themselves to play quietly as the sounds play in the background.  However if the kittens respond adversely to the sounds you should stop it immediately and reassure the kittens.  Another attempt to play the sounds should be done only on the next day and at a lower volume. Over the days you should repeat this process till the kittens are eight weeks of age, in the meanwhile gradually increasing the volume of the sounds slowly.  Common sounds that should be introduced include that of the radio and the television- both in the music mode as well as the talk mode- that are best introduced by the second week.  Other common household sounds that could form part of the recorded sounds played include the sounds of the pressure cooker, washing machine from the second week onwards while the sound of people shouting should be introduced by the sixth week. Litter box training, the scratching post and bringing in the bingo!

The litter tray and the scratching post should make their entry by the second week onwards.  She may take some time to understand the litter box, may be by the third week she would be more appreciative of it. But you could introduce it by the second week, placing her in the box immediately following a feed and after she wakes up from her nap. There are bound to be errors and mishaps, do not punish her for them, but reward her when she uses the box correctly.  Scratching is an innate behavioural response of kittens and you should provide her with a scratching post from the second week onwards.

The name game and other pets

Kitty would have been named by the time she is a week old.  But she actually gets to learn her name by around six weeks of age when you could introduce a small game where she is called by her name and her response is rewarded with a food treat. This reinforces her identifying with her name, while keeping the whole episode a pleasurable experience.  Your home may house more pets that kitty would have to be introduced to.  This should take place after the fourth week, preferably by the sixth. Playtime is an intrinsic part of a kitten’s life.  It is akin to her nature and it also keeps her busy and free from boredom.  Play begins on a small scale with toys, as a first, that could include a box, small balls or cotton reels, an empty plastic bottle, and furry toys all of which should be introduced one at a time from the fourth week. Play activities such as playing with a string or a toy on a string should be initiated from the fifth week onwards.

On an ending note

Socialising your kitten is important not just from the point of view of our happiness.  Your cat will have to encounter humans within your home, as she grows up and kids as well. So, from the point of view of the cat, as she grows up she has to get used to all these situations so that she remains relaxed, healthy, calm and happy.  This is why socialising her is equally important to the cat as well and is not just a human desire.

Pests That Feed on Your Pets By Dr. Bhanu Dev Sharma*Your pet’s soft and warm fur provides the perfect environment for fleas and ticks. These insects feed on your pet’s blood and can cause health problems ranging from allergic reactions to serious tick-borne...
Read More

Importance of Spaying and Neutering in Cats

Fatema  SiamwalaThis is first of the two part series on cat keeping.  Every cat parent wants to be the BEST cat parent but do you know what it takes to be the best? Here are the top 8 things every cat parent must be aware of: 1. FOOD & WATER We all want our cats...
Read More

The Kitty Book Of Genealogy – Do Not Underestimate Her

Dr Reeja George*Our Evergreen Companionship The evergreen association between cats and humans goes back to over a thousand years. Today we have quite a lot of evidence from fossil records of early human settlements that shed light on the inextricable links between...
Read More