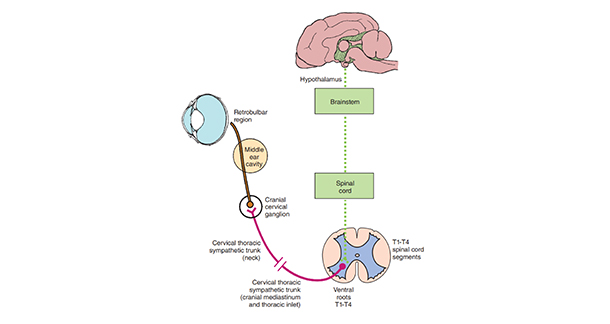 Horner’s syndrome is a neuro-ophthalmic condition seen in cats and dogs. It is a term used to define a group of clinical signs related to lesions disrupting the sympathetic innervation to the eye. Horner’s syndrome is classified as first (central), second (preganglionic) or third order (postganglionic), according to where the lesion is located within the oculosympathetic pathway.

Sympathetic innervation to the eye is a three-neuron pathway (Fig. 1).

The cell bodies located at hypothalamus and rostral mid-brain, projects axons through the brain stem and cervical spinal cord, where they synapse on second order neurons.

The axons exit cranial cervical ganglion and form plexus around the internal carotid artery. Some of the fibers pass through the tympanic bulla on the ventral surface and post ganglionic fibers may continue with internal carotid artery and enter the cranial cavity via the tympanooccipital fissure and carotid canal. Once within the calvarium, postganglionic fibers course ventral to the trigeminal ganglion and exit with the ophthalmic branch of trigeminal nerve through the occipital fissure. The fibers become nasociliary and long ciliary nerve, which supplies to iris dilator muscle, muscles of the periorbita and eyelids. Cats have sympathetic innervation of smooth muscles within the third eyelid, a feature that is absent in the dogs. 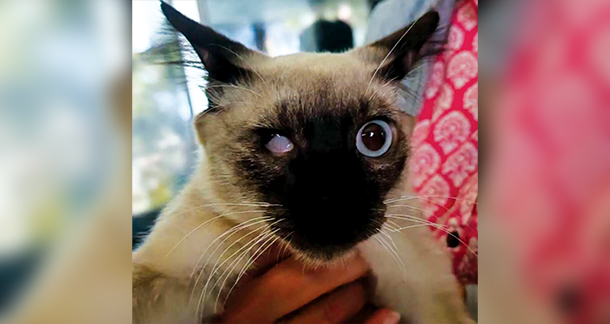 The lack of sympathetic innervation to the eye results following clinical signs:

When the sympathetic pathway is compromised, the inhibitory effect of the parasympathetic innervation to iris dilator muscle further prevents pupil dilation and exacerbates the miosis. As a result, anisocoria develops. Pupillary light reflexes and vision remains intact in the affected eye.

Ptosis develops because of loss of sympathetic tone in the thin muscles of the eyelids.

The periorbital smooth muscles help maintain globe in the anterior position within the orbit. When these muscles relax without sympathetic input, the retractor bulbi muscles are without antagonism and they actively retract the globe in to orbit, producing enophthalmos.

The protrusion is passive in dogs and secondary to enophthalmos. In cats, it’s mainly due to sympathetically mediated smooth muscles in the third eyelid.

Systemic diseases such as hypothyroidism, diabetes mellitus, lymphoma, and Neospora canis infection have also been associated with Horner’s syndrome.

Many ophthalmologists use the minimal dilation of miotic pupil to parasympatholytics (Tropicamide) and the complete ophthalmologic examination to rule out subtle uveitis and keratitis. For localization of the lesion, a dilute direct sympathomimetic (phenylephrine) is instilled in both eyes. If the lesion is postganglionic (third order Horner’s), a drop of 1% phenylephrine will create pupillary dilation, resolve enophthalmos, third eyelid protrusion and ptosis in under 20 min., while it will not dilate normal pupil. When the Horner’s syndrome has been present for longer than 3 weeks and the pupil fail to respond to 1% phenylephrine, bilateral instillation of 1 drop of 10% phenylephrine is pursued and again the response is timed. Both the normal and affected pupil should dilate within 20 min.; the lesion is localized as postganglionic (third order Horner’s). If the response time is between 20 and 45 min., the lesion is localized as preganglionic (second order Horner’s). If the response time is more than 45 min or no resolution, then the lesion is localized as upper motor neuron (first order Horner’s).

Further diagnostics are warranted to investigate the etiology of Horner’s syndrome. In case of postganglionic lesions, a thorough otoscopic examination should be performed. A complete blood count and serum biochemistry are advisable, to rule out metabolic disorders such as hypothyroidism and diabetes mellitus. Cervical and thoracic radiographs are indicated in cases of preganglionic lesions. Magnetic Resonance Imagining (MRI) or Computed Tomography (CT) is warranted in all cases of central lesions.

Treatment and prognosis are dependent upon the underlying etiology. Symptomatic treatment with 1% or 10% phenylephrine can be used for short-term improvement of signs. Since there is no specific etiology for idiopathic Horner’s syndrome, there is no specific treatment. Most cases of idiopathic Horner’s will show improvement within several weeks to months. When permanent deficits occur, they are largely considered to be cosmetic with minimal to no impact on patient’s quality of life.

The Importance of Sterilizing Your Pet

Veterinarians and animal associations always promote the benefits of neutering pets. Hundreds of thousands of unwanted dogs and cats, including puppies and kittens, are euthanized yearly.  Spaying and neutering your pet can increase their lifespan, decrease serious...
Read More

By Jay Prakash Yadav and Maninder Singh* Introduction: Rabies is a highly fatal but vaccine-preventable viral zoonosis (diseases which are naturally transmitted between vertebrate animals to humans and vice-versa), caused by genus Lyssavirus of the Rhabdoviridae...
Read More