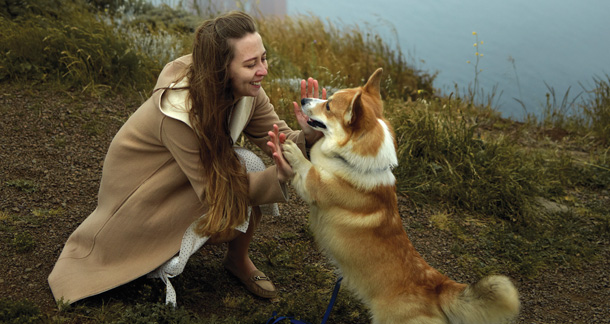 Nature is diverse and co-existence is the rule of nature. Humans are not its ‘only’ creation; there are numerous other creatures as well, such as animals, whom Mother Nature has given birth to. Like humans, they too deserve to live their lives to the fullest. Nature has instilled a peculiar instinct in both humans and animals, probably due to which they have shared a distinctive yet quirky connection from time immemorial.

American Veterinary Medical Association (AVMA) has defined the human-animal bond as “mutually beneficial and dynamic relationship between people and animals.”

Since ages, this relationship between humans and animals has evolved through various phases – from being prey to humans’ hunting instincts to being their hunting partners, from being a medium of carriage and travel to being their aide in farming, from being protectors of humans to being their soulful companions! According to Bayer, a life science company, “the human-animal bond has evolved for more than 15000 years.” Apart from providing protection and service to people, animals also used to serve them during wartime. On this, US Army Medical Department Journal (AMDJ) made a point, “these animals not only provided protection, but they could also offer stress relief and a sense of pride to their human counterparts.”

Independent of debate, whether animals met human needs or was it the other way round, this close and intimate co-existence ideally provided a positive and pragmatic emotional experience on both sides.

In an urban setup, increasing proximity of humans with animals has helped to eclipse the ancient features and uses of the latter, which in some cases have become redundant (hunting instinct of humans). Thus, in cities, dogs and cats are usually kept asmere pets.

Over the period, these domesticated pets have evolved to be quite dependent upon humans. They thrive through the care that humans can provide. They rely upon humans for their basic needs such as food, shelter, health care and so on. Humans have also started feeling a sense of responsibility towards them. They have developed a warm feeling of affection for animals.

Animals too share a similar emotion, so they make great companions to humans. They do show us how to love unconditionallybecause their emotions are all pure. Since ancient times, humankind has understood that animals serve as a link to the intuitive and to the Divine.

Mary Lou Randour, in ‘What Animals Can Teach Us About Spirituality’, has described animals as spiritual companions to humans. In it, she narrates a story of a boy who is given a dog to care for as a form of therapy after the former commits a sin of murdering someone. The dog comforts him and gradually, the teenager learns to love him. His pet helps in healing his soul by teaching him how to love.

Anyone who has ever had pets knows that this eternal connection is too deep to be described in words. Animals can sense our moods and have the ability to transform our lives into something we could never think of!

How the Human-Animal Bond Benefits Us

This enduring human-animal bond is beneficial to our pets in many conspicuous ways. As we love them and feel a sense of responsibility towards them, we make sure that they are efficiently provided with food, shelter, medical care, entertainment, and affection. We go an extra mile to take care of their hygiene and to keep them healthy.

Whereas, the numerous ways in which humans are benefitted are, in fact, much more than mere basic needs:

Stress Buster:Animals act as stress busters for humans. Studies have shown that being around a dog or a cat can release the oxytocin hormone and decrease levels of the stress hormone cortisol, resulting in a more relaxed state of mind. Recently, the rising prevalence of Animal Assisted Activities is an apt example of this fact. Various NGOs take help of therapy dogs to heal patients in nursing homes, differently able children etc.

More Active Lifestyle:Taking care of a pet involves a considerable amount of physical activity. A 2011 study by Michigan State University researchers found that 60% of dog owners who walked their pets regularly met the recommended criteria for regular exercise. Your pet is possibly the best personal trainer you could ask for. It would probably never let you feel lazy.

Fewer Allergies:Studies have shown that children who grow up with animals develop fewer allergies than those who aren’t raised with animals.

Emotional Support: Cats and dogs make great companions. They never let you feel lonely. They feel more than happy to lend you an ear should you want to moan about an awful day you have had. Pets provide us with unconditional and impartial emotional support and love.

Service/Therapeutic Animals:Service and therapeutic animals are invaluable. They provide help with daily tasks, emotional and mental support, and help us recover from traumatic events.

Teach us to be Responsible and Empathetic: Being around animals help us learn practical skills of owning a pet, such as catering to their cleaning and grooming needs.They teach us to be more empathetic towards others.

Going through all these benefits, who would not want to bring home their perfect companions? Our pets bring so much love, joy, affection, and humour to our lives that even the closest human relations cannot match up to this human-animal bonding. They make us laugh, comfort us when we are feeling low, and are always there for us no matter what!