Kitten Diaries: A Sneek Peek Into Those Early Days 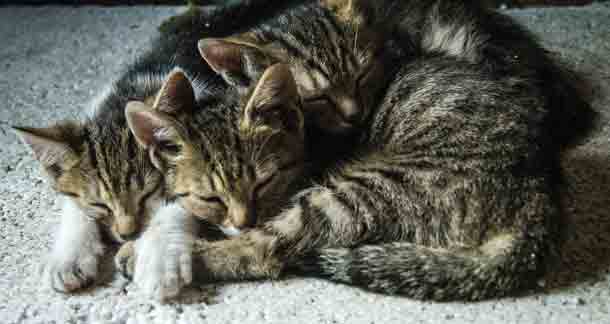 During their first week of life, kittens spend much of their time suckling and sleeping and this combination results in doubling of their birth weight by end of the first week.  As they enter the second week of their life, they should continue to increase their weight to the tune of 10 grams a day.  The second week of life of the kitten is also momentous; in that, it ushers in a new phase of her life as she opens her eyes between the ninth and the fourteenth day. Her eyes will be blue for several weeks and her baby pupils begin to learn the art of dilating and contracting in response to the changing light, so you have to be extra careful not to use very harsh of glaring lights as this may damage her eyes.  By the third week, her world becomes even wider as her ear canals open up and she also becomes receptive to various smells and odours around her.  With eyes and ears open now, she becomes more confident to venture a little away from mom and engage with her environment.

Kittens receive 25 per cent of their maternal antibodies through the placenta. Cats that have been vaccinated also transfer immunity to their kittens within the first 24 hours of birth through colostrum, the first secretion that you observe from the teats.  Maximum absorption of antibodies through the digestive system via colostrum occurs at about eight days of life, and it reduces over time to almost nil by twenty four hours after birth.  These antibodies will protect the kittens for a period between 12 and 18 weeks. But we can’t really be sure of when their immunity will begin to wane, so it is important that you follow the vaccination schedule recommended by your local veterinarian. Whatever the case, avoid exposing the kittens to animals with an unknown vaccination history until all the kitten vaccinations and their boosters have been taken.  You can speak to your veterinarian about which all vaccinations should be taken and keep a record of the schedule of boosters as well.  Generally, all kittens should be vaccinated against rabies as well as Feline Viral Rhinotracheitis, Calci virus, distemper, and Panleukopaenia. In some areas, you may also be advised to vaccinate your kittens against feline leukaemia.  Along with these vaccinations, your veterinarians will also advise you on the schedule of giving your kittens and the cat mother medicines for worms.

At birth, the newborn kittens weigh around 80–85 grams and are very helpless as they cannot see or hear, relying heavily on their mother’s caring warmth and her regular brushing with her rough tongue. It is very important that new born kittens be kept warm in the first weeks of their life.  Usually the new mother will be dutiful in this aspect and take care of the kittens by nuzzling them under her body where they are kept warm with her body heat.  However, many a times, she may be tired or irritable, in which case you may have to move in with a light covering of a towel or blanket, if the climate is not too cold. If you live in an area with harsh winters and sub zero temperatures, you will need to use a hot water bottle at body temperature covered with a cloth.  Keeping the room warm is important always and especially so in areas where temperatures go down.  You should regularly check bedding in the nesting box and if it is too soiled or wet and soggy, change it.

Kittens nurse within one to two hours after their birth. Kittens need to be fed very often, just like human babies and in many cases, they latch on to their mother’s teats and suckle almost immediately after they have been born and cleaned up by her.  If in any case a kitten does not start to feed even after 30 minutes of its birth, you could help it latch on to the mother’s teat and even after that if she is unresponsive, you will have to call your vet.  Generally, a healthy kitten would pass through three stages of nursing.  In the first stage, she is quietly guided by mom, who wakes kitty up with her tongue and then guides her to mom’s cosy warm body.  By around nine days and into the second week, as her eyes and ears respectively become functional, she passes into the second stage of suckling where she becomes more equipped to feed at her will, which she begins to do.  For the first four weeks, kittens feed solely on their mother’s milk. By five weeks post partum, kittens have grown up to the extent that they initiate the nursing process as and when they require a feed.   Also by the fifth week, they may attempt to explore their mother’s feeding tray and attempt to eat her feed, which should always be good quality kitten food with a named meat source.  As the eighth week approaches, the mother cat herself weans her kittens by making herself less available and gradually kittens introduce themselves fully to their mom’s feeding tray.

After eight weeks, the kittens should be eating what is referred to as a kitten diet, which has to be very energy dense as well as rich in protein and highly digestible.  Significant changes in the behaviour of the kitten take place during this time as the kitten engages in a lot of play, running about, and even jumping off things! You have to be extra careful at this stage – despite the fun and frolic – and ensure that she is kept in a safe place without danger of falls.  The period of eight to twelve weeks is also characterized by a period of rapid growth of the kittens. Their diet should have provision to include nearly three times higher energy requirements when compared to that of an adult cat.  These meals should be prepared so that they contain a minimum of thirty per cent of high quality protein.  Between four and six months, kittens are gradually entering a crucial point in their lives; they step into adolescence and attain sexual maturity during this period.  In case you don’t intend to breed your cat you could speak to your vet about spaying or neutering so that accidental litters are avoided in female animals.

Grooming is the exclusive domain of the mother cat.  She busies herself diligently licking up all her kittens one by one, especially, during the first week and through to the fourth week.  Her specific anogenital grooming is important in initiating or activating the kitten reflexes to eliminate both urine as well as faecal matter, both of which are religiously consumed by the anxious mom.  This keeps the nesting box and the little kittens relatively clean during this period.  By the fifth week, the kittens become more adventurous and begin to leave their mother’s side and even out of the nesting box as they explore their new world. At this point of time, they begin to relive themselves just near the nesting box; you could provide them with a small low-sided cardboard box with minimal litter that they would use in time.

On an ending note, whatever the case, this period of kitten-hood is guaranteed to be a very refreshing one for both the cat mom and the cat parent.

By Sameer Gudhate*Oscar cichlids are hugely popular in the aquarium hobby. Oscar fish have a special appeal to them. Oscar fish are known for their quite aggressive behaviour towards other fish. They are perhaps one of the most beautiful fish and they swim so...
Read More