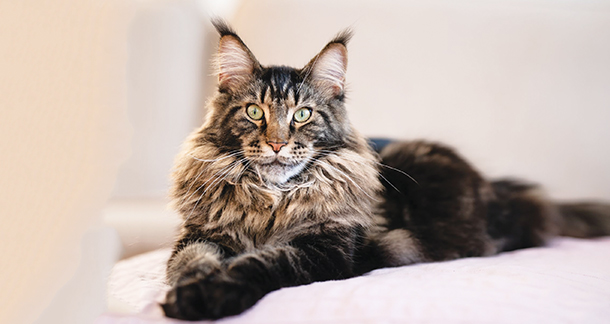 If you have a Maine Coon Cat, you won’t miss having a dog! The Maine Coon’s behaviour and loyalty are particularly doglike for a cat. Despite having relaxed and laid back attitude, they are not overreliant but are people oriented. This breed may appear intimidating to some, but it is not… it has a sweet personality. What a unique cat! Isn’t it? Let’s learn more about it…

Having medium to large size, Maine Coons are rugged and solidly built; generally, males are larger than females. It is a heavily boned muscular cat, with large tufted ears and a shaggy coat that drapes longer on the stomach and behind the legs but is shorter over the shoulders. However, the coat is coarser than other long-haired breeds, so comparatively it requires less frequent grooming. They have a dense bushy tail, roughly about the length of their body. Their chest is broad, legs are thick, and they have a slight dip under their large eyes. Maine Coons exist in variety of colours and patterns, Brown Tabbys being the most recognizable ones!

Maine Coons are gentle-mannered, easy to get along with cats.                They would sense your mood, would be curious about your day, and would purr their way straight into your heart… That’s how their special effect is! They are sociable and inquisitive, and can co-exist peacefully with other cats and cat-friendly dogs. Also, they can be great playmates to children. They are very talkative and have an opinion about everything; their above-average intelligence makes them easy to train.

Speculations and folk tales never end, and true origin of Main Coons remains uncertain. According to the popular belief, they developed naturally in the Northeastern United States. Although this breed was likely known throughout New England, it was especially popular in the state of Maine. Their popularity skyrocketed in the late 1800s, where some farmers began exhibiting their prized ‘coon cats’ at the Skowhegan Fair, which is the nation’s oldest consecutively held agricultural fair. The show career for the Maine Coon cat began in New York in 1895 when the best cat award was given to a tabby Maine Coon named Leo. Its popularity dwindled at the turn of the century with introduction of exotic long-haired breeds like the Persian and Himalayan. However, in recent years, Main Coon has managed to rise again, becoming the second most popular breed in North America.

MAINE COON AT A GLANCE

Parti-colour and White (calico, tortoiseshell and white, blue-cream and white),

Shaded and Smoke, and

Physical Attributes The Egyptian Mau is a long cat although she tends to be medium in size, with the males larger than the females. The Mau is heavily muscled and strong. A wedge-shaped, but soft head sits atop her muscular body. The forehead features an “M” shape,...
Read More

Having and watching a ragdoll cat growing up is heavenly… every cat lover would know! This gorgeous, gentle, and luxuriantly coated cat breed lets you cuddle her just like a doll. It could be an excellent companion for your whole family. Want to know why? Here’s the...
Read More

One of the most recognized and adored felines, who enjoy a calm and relaxing environment; it is hard to resist the charm of a Persian Cat! They are the happiest when at home and will greet you at the door when you come home after a long day. They are neither needy nor...
Read More