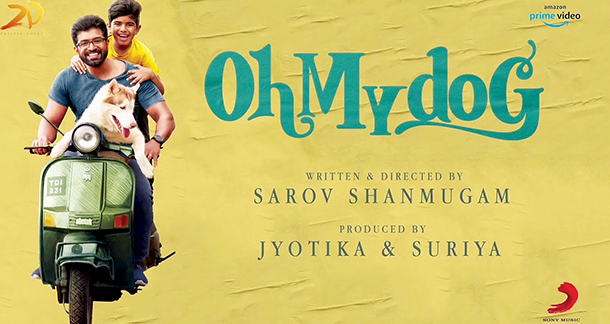 A Film with a Message

When I read the title on Amazon Prime I was a little taken aback, that too for several reasons. Initially, I thought it was God but then going back to the title, I could not resist but click to view what the drama was all about! When the film ended, I was happy I had watched it. Not a diehard dog lover myself but the film does give you a sense of love and care for animals and the natural bonds they have with children, especially dogs. It is a wake-up call for all of us, as we sometimes become insensitive towards the needs of animals. It can at times be very cruel indeed!

It would be unfair to talk about the film further without telling you a few basic facts about it. It is a Tamil film released this year in April. Being the directorial debut of Sarov Shanmugam, this film has a simple yet touching storyline with all the elements of popular cinema to appeal to the entire family, especially where there is a constant debate to bring in a pet or not. The key characters of the film are the young boy Arjun (played by Arnav Vijay), his mother (played by Mahima Nambiar), and his father (played by none other than the popular actor Arun Vijay).

The dog in the film is the star attraction and keeps you glued to the screen; it is a Siberian Husky, named Simba. Simba is shown as a puppy and then later grows up to take part in competitions and goes through rigorous training wanting to win just because its family wants it to. In the film, Arjun realizes that Simba is blind as his school friends first tease him and later accept and help Simba.

Simba was abandoned by its owner because it was born blind. The action of an insensitive adult is counterbalanced by a young single child who finds the puppy and at first hides it in his room without the consent of his parents and later also takes it to his school, where despite of financial problems, the children and school teachers gather funds for its operation. The film is a pointer to the love and compassion shown by children towards animals and how they motivate adults around them by their attitude and genuine concern.

The film brings out harsh realities of how egoistic power hungry individuals treat animals. When competing for a prize, they are driven beyond their endurance level and trained harshly with the goal… only to win. The film brings out this aggressive human nature and injustice towards animals.

The training of Simba shown in the film is very interesting and brings out the special quality of Simba. The way it follows orders of the boy and coordinates with the sound of bell is very gripping. Also, the different rounds that the competing dogs have to follow are very engaging for the viewer. It mesmerized me and I too wanted Simba to win and show that despite of its poor condition, its love and obedience is the winner. Since it is a popular film, one has to discount a number of loopholes in the story but it does bring in a feeling of love for dogs.

It is also a pointer to the parents that single children are looking for companionship that can be provided by a pet. In the film, we also see that Simba, being an intelligent dog, can also sense danger and arouses the entire household to get timely help for grandfather, who needed immediate medical attention.

For me, it was a film worth the time and left a mark!

*Author is a Media Consultant/Media Educator/Educational Documentary filmmaker/Instructional Designer. Presently she is working independently as a consultant but has worked in the field of television production and later on the new media besides being guest faculty to share her experiences.