Pet of The Month – Simba 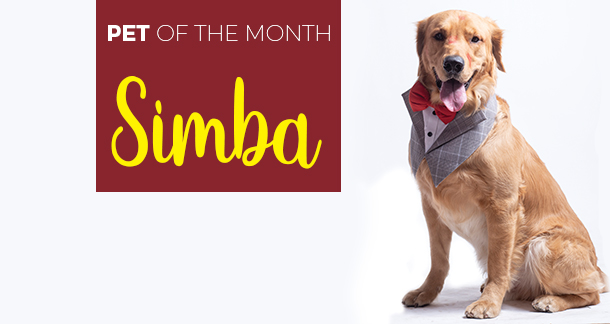 LET’S INTRODUCE YOU TO OUR ‘PET OF THE MONTH’, SIMBA SETH–A PAWFLUNCER WITH A CHARISMATIC PERSONALITY. SIMBA’S FILMY AVATAR IS HARD TO IGNORE. LET’S GET TO KNOW A LITTLE MORE ABOUT SIMBA DIA, HIS PET PARENT

Simba is rescued from a local pet shop in Punjab, where he was abandoned, along with his siblings, the intent was to put everyone up for adoption and give them happier lives. I used to be a cat person but, after witnessing Simba not being adopted by others, due to existing medical issues as a puppy, we ended up adopting Simba. At that moment I had realised how gratifying it feels to save a life and raise it. We were not sure of his name, but he was a fighter, who fought against callousness and disease, we named him SIMBA.

It has been 2.5 years since Simba came to my life. Emotionally, he is my strength that keeps me going every time and helps me overcome the gloomy little things of my life. Psychologically, he has helped me become a better version of myself. When our family was affected by COVID, he had given us the biggest support  and strength by not leaving us out of sight even for a minute. He sacrificed his sleep and waking hours by taking care of us, warming me with his cuddles and adjusting according to us. I was surprised to see him being so emotionally attached to us. He realised the situation and difficult circumstances we going through and acted maturely.

I believe pets must not be given only commercialised products, but also homemade food. So I feed him kibbles along with chicken for supper, he prefers fruits or buttermilk. His diet is a blend of all the prerequisites he needs in accordance with his sensitive stomach.

We do not try packaged treats rather feed him cottage cheese or biscuits for his training. We give him a fruit mix and flavoured curd occasionally. We have often heard commercialised products are good for a dog’s coat, but I believe feeding or adding a bit of fish/fish oil helps bring natural shine and softness to the fur.

I shop for Simba from JUST DOGS it has always been in-store shopping along with him, where we pick the products/toys he prefers and loves. I am surprised how Simba knows what is there in every row and chooses his requirement and brings it to me playing with it and doing his happy dance after getting his favourite product during checkout.

Once he grabbed a toy from the shop, opened the door and ran straight out of the shop, which was indeed fun for him, yet embarrassing for me!

We prefer a professional grooming on him so that his skin, or any part of his body is not at risk and is cleaned properly.

I remember one time puppy Simba was scared of big dogs, he hid his face inside my father’s arms that was the moment I realised that he was finally well acquainted and considered our house his home.

On the second day, at our home, it was his first morning. The little baby was unable to climb my bed so had his little face on the side of my bed and woke me up with his little teeth nibbling my hand asking for food. He loved chewing on my hair and used to scratch my head as if he’s the master. He loved playing with a broom and was full of life during his puppy stage, even after having medical problems. I remember never letting him on climb my hands or shoulder, least I should harm him, or anything unlikely would happen.

However, as he grew up, he became bold and charming. His graceful walk and need to explore everything, stole everyone’s heart. There was an incident where Simba accidentally ended up tearing my sweater. I laughed, and then cut a sleeve out of it to protect Simba from the cold. Simba wagged his tail so cheerfully, it seemed to me that he loved wearing clothes. Gradually, we ordered clothes for him. Now he owns his personal wardrobe and four pairs of sunglasses along with two pairs of shoes, which brings out his uniqueness and his own style. His expressions since childhood have always been funny and epic. When I merged both, I ended up laughing and decided to share it with the audience, people seemed to love it and supported his content which made him talk of the town and by polishing his training skills, he was a perfect fit to be in campaigns and advertisements. His filmy avatar is loved by everyone!

The date is 19th November 2022, it’s a very special day, I woke up to two big black eyes staring at me, as if saying “mother good morning, you woke up late again” “ do you even sleep at night” I asked, kissing him on his forehead a daily ritual from past 18 years. “...
Read More

Meet our Pet of the Month Posto - She is a fighter, she is truly an inspiration, who taught Puja, her bestie, how to live life to the fullest and without any regrets. Here's Puja, sharing her story with us...Hi! My name is Puja and I'm from Durgapur, West Bengal. I...
Read More

Our ‘Pet of the Month’ Oreo is someone who changes forms like a Chameleon – sometimes an adorable golden wonder and sometimes a professional dog model, sometimes a cute innocent pup who amazes his parents with his antics and sometimes an impeccable dog influencer who...
Read More