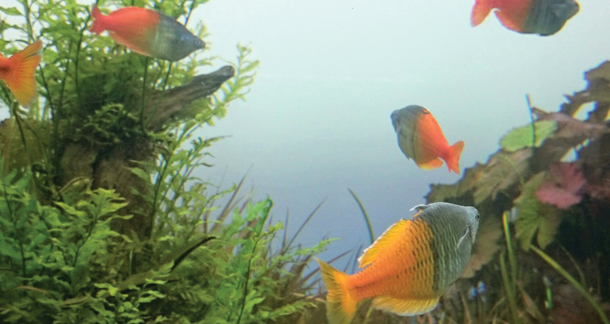 Sight of Rainbowfish is a delight for aquarists to watch. The variety of colours they change while swimming, truly justify their name. Their popularity is not unknown as they have been one of the favourite species of fish since the start of last century. The factor that works well for them is that they are easy and peaceful species to keep, even for the beginners.

Rainbowfish have an exuberant and unique appearance. They exist in charismatic iridescent colours that change with the change in the way and angle light reflects upon them. Males and mature fish sport more vibrant colours than their younger and female counterparts. The length of different varieties of Rainbowfish ranges between 3 cm. and 15 cm. (1.2–6 inches).

Rainbowfish belong to a subfamily named Melanotaeniidae and are generally found in Australia, New Guinea, and some of the South East Asian Islands as well.

Rainbowfish are a peaceful and schooling fish. They prefer to be housed with other fish in schools of five or more, making them a good choice for a fish hobbyist. However, it is advisable to limit male Rainbowfish to just one per tank as they have a tendency to become aggressive to the extent of injuring each other during breeding season.

Tank Size –Rainbowfish are very active and need plenty of space to swim. An ideal tank size for Rainbowfish may vary between 30 and 55 gallons, depending upon the species you select.

Tank Decoration–It is important to provide Rainbowfish with plenty of decorations and places to hide. The natural Rainbowfish habitat is filled with aquatic plants, so they will appreciate a planted aquarium. Consider using tall plants or other structures such as bogwood, rocks etc. to ornate the tank. Keepers of Rainbowfish usually opt for a dark substrate and strong lighting since this makes the Rainbowfish look more vibrant.

Water Conditions – Rainbowfish needs freshwater environment i.e. dechlorinated. They prefer temperature between 74 and 78 degrees Fahrenheit, generally with a pH of around 7.0 to 8.0 and alkalinity that rests between 5 and 20 dKH. Please note that if room temperature drops below 74 degrees Fahrenheit, consider using a tank heater. Along with that, it is advisable to use an adequate filtration unit swap the water out every two weeks with treated tap water.

Tank Mates – As already mentioned, Rainbowfish exhibit docile behaviours towards other fish, so you can opt to fill your tank with various other beautiful aquatic creatures. These fish cohabit well with other fish species such as tetras, discus, guppies etc. displaying their tranquil personalities.

By nature, Rainbowfish are omnivores and can survive on both plant and animal matter. Primarily they are surface feeders meaning they prefer to eat food that floats on the surface of water. Therefore, you need to feed them frequently, yet cautiously in small doses so as to avoid the uneaten food from being sinking to the tank’s bottom, consequently, polluting the water.

Coloured or spirulina flakes or even betta treat or tropical flakes are preferably a descent choice to feed Rainbowfish. Occasionally, throwing in ground vegetables or frozen shrimp is also a good idea. Sometimes you can even treat them with mosquito larvae, blackworms, bloodworms or glassworms. However, it is noteworthy here that whichever foods you choose, make sure you rotate your fish’s diet every few days. This will allow them great variety and higher levels of nutrition.

Rainbowfish are easily stressed by overcrowded conditions. Along with that, it is important to maintain perfect water quality, temperature, and pH. Staying on top of these factors can help keep your Rainbowfish happy and healthy!