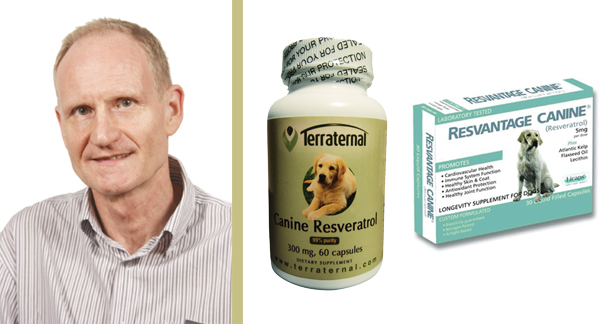 Resveratrol is often touted as the key substance that renders moderate consumption of red wine heart healthy. The compound comes from grape skin and seeds during wine making. Resveratrol also acts as (conjoint) eye catcher for few nutritional supplements, treats and complete foods for dogs. In those products, resveratrol’s plant carriers are (extracts from) Japanese knotweed, grape skin or seed.

Under test tube conditions, resveratrol’s polyphenol structure can act as chain-breaking antioxidant: by taking out free radicals, resveratrol obstructs propagation of autoxidation chain reactions. Going a step further, resveratrol is thought to protect the canine body against oxidative damage by free radicals, thereby lowering the risks of cancer and heart disease, and supporting longevity. However, there is no evidence that intake of resveratrol affects any canine disease.

In dogs fed regular, commercial foods, resveratrol may not be detectable in blood. After high intakes in experimental settings, resveratrol appeared in blood in measurable amounts and likely was adequately converted, and then excreted with urine and bile. However, very high intakes, more than 4.8 g per day, lowered food intake and body weight in junior, 8-kg Beagle dogs. Some dogs may be (hyper)sensitive to toxicity of fresh and dried grapes, but resveratrol is not involved.

Commercial, alimental pet products featuring resveratrol may not achieve appreciable contents of the alleged beneficial compound in dogs’ blood, which undermines credibility of the health claims. More directly to the point, there is no scientific substantiation for the claims. Admittedly, a canine study of longevity, with dietary resveratrol as the only variable, is near impracticable. Three studies in mice show that resveratrol does not extend life span (1-3).

Resveratrol is a polyphenol stilbene. It consists of an ethylene moiety with a di-hydroxylated and mono-hydroxylated phenyl group as substituents on either of the methy-lene ends. In trans-resveratrol, the two phenyl rings are located on the opposite sides of ethylene’s double bond.

Phenolic compounds belong to an antioxidant type that can eliminate free radicals. As a hydroxyl group tends to release electrons towards the ring, its proton and one electron are connected with the unpaired electron of a free radical. In the process, the radical is neutralized, and thus inactivated, while the phenol is converted into a relatively unreactive radical stabilized by its circular flow of electrons. The concept of hydrogen-atom transfer may hold for resveratrol’s in-vitro antioxidative capacity (4, 5), but it does not necessarily work in-vivo, after oral intake.

Dogs absorb ingested trans-resveratrol (glucoside), followed by glucuronidation and sulfation, probably in their intestine (6) and liver (7). Canine urine was found to contain resveratrol sulfate only (8). Mechanistic and quantitative aspects of absorption, urinary and biliary excretion are all unknown.

Dogs given trans-resveratrol at oral doses of 200, 600 or 1200 mg/kg body weight.day (mg/kg bw.d) showed dose-dependent, maximum plasma concentrations of resveratrol and conjugates after about 3 hours of dosing (9). Total levels comprised free, sulfated and glucuronidated resveratrol in an approximate ratio of 6:24:70. After 13 weeks of daily administration, just before dosing, total plasma level for the lowest resveratrol dose was about 55 ng/ml (10). Resveratrol sulfate most convincingly approached a dose-dependent, steady-state concentration.

Regular dog foods probably supply negligible resveratrol as its content in grains and animal products may be undetectable. In blood from 12-h fasted dogs fed on a commercial dry food, resveratrol (free plus glucuronidated) was not measurable, or lower than 5 ng/ml (11).

In a 3-day study, six dogs received trans-resveratrol orally (200 mg/kg bw.d) or no supplementation (14). Just prior to dosing, on day 0, and 4 hours post-dosing (day 3) blood samples were taken. Phagocytic and oxidative-burst function of polymorphonuclear cells were assessed with aid of ingested, labeled bacteria and a fluorogenic, reducing substrate. Oral resveratrol increased phagocytosis and decreased oxidative burst. The latter effect also occurred upon incubation of canine blood with resveratrol (15).

Red and white grapes, and their dried products, currants, raisins and sultanas, can cause acute gastrointestinal and renal toxicosis in dogs (18). The estimated poisonous intakes include as little of 4 fresh grapes up to 30 g fruit dry matter/kg bw, whereas many dogs are invulnerable. The highest, owner-reported toxic dose may equal 1.3 mg resveratrol/kg bw (cf. 13). Initial toxicity signs are vomiting, followed by anorexia, lethargy and diarrhea. The toxic principle is unknown.