“The One in Need is the Best Breed!” 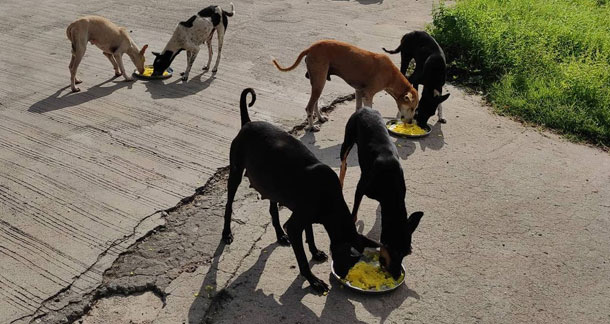 Hello everyone! My name is Jigna Hiten and I’m the one behind Rainbow Animal Aid, the very first as well as one and only registered not-for-profit animal charity in Diu.

This thing is very new to the local public of Diu so you all might have questions on how it all started and why do we need anything like this charity, vet, shelter or feeding drives in Diu or why shall we put efforts for making lives of street animals a li’l bit easier.

I’m actually a Civil Engineer by profession and have completed my study from Rajkot & Vadodara; it all started from Vadodara when I came across a very dedicated 24*7 animal helping team from Vadodara Animal Aid.

I always wanted to have a pet but I was allowed to only once I completed my studies. While I was in my last year of engineering, I came across a little 30 days old kitty whose family got visas and was soon about to shift abroad and they were suppose to leave her tied in a small balcony of their house. I rescued her with the help of my friends and took her home. It’s Jenny, my first rescued and adopted cat; I never knew about her breed but she turned out to be a mixed breed. Later, I rescued another cat who was abandoned on roads as his ear drum was ruptured and he was stinking like rotten eggs, he had no one to go to, so I adopted him too. That’s my Henry now! I ended up rescuing 5 foster failed pets, which now are a family to me. It is because of them I started feeling for each and every animal on road. Because at home or on road, animals have the same kind of love & loyalty to offer! 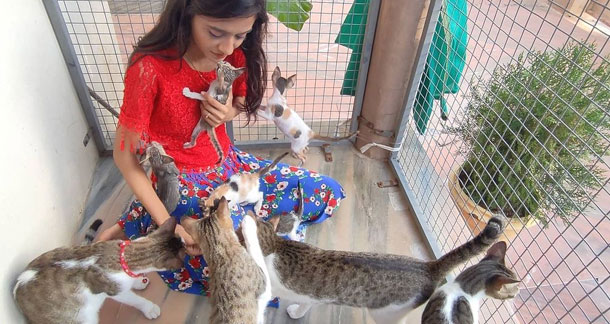 Soon as I completed my studies, I came back to Diu last year and started working for getting our little charity registered. Currently, we are fostering 25+ Indian breed cats & kittens and a few dogs, who all are up for adoption to worthy families. We, as an NGO, have been feeding 370+ animals in 20 different locations in and around Diu since a year now.

Stray animals of Diu are unfortunate of not having a chance at quality veterinary medical attention. Soon I also noticed that there’s overpopulation of puppies as well as kitties in Diu unlike other cities because Animal Birth Control Program in Diu isn’t effective and I haven’t got any leads if we even have anything like that here locally. Whenever I get a call for an animal who’s a victim of human cruelty, an accident victim, or any seriously injured animal, nearest surgical option is Junagadh and it’s really hard to take stray animals that far without an ambulance. But anyhow, we try our best on ground with the help of our far distance vets on call and video calls. We have got 11 cats sterilized from Rajkot this year. And we wish to do more in coming time.

Our main goal is to establish an animal sanctuary in Diu with 24*7 emergency medical facilities for homeless, abandoned, and unfortunate street animals. We aim to install a quality surgical, imaging, and veterinary laboratory all based locally in Diu. We wish to facilitate dog/cat boarding and foster facility in our sanctuary and promote stray animal adoption over buying of English breed animals from pet stores or unethical breeders. There have also been people breeding and selling Persian Cats and breed dogs in Diu, but soon we’ll be creating a note on how Animal Welfare Board of India has declared and strictly mentioned that only certified breeders registered with Animal Welfare Board of India can breed animals. In-house and backyard breeding is illegal and these activities of selling animals can be legally restricted.

However, we have been continuously getting negative comments on feeding homeless animals on streets. Just to create an awareness, I’ve already applied for a feeder protection pass from Animal Welfare Board of India and as stated by AWBI, any resident of India does not need permission to feed animals on streets or public places at times when there are less people around and no kids playing near the feeding area, and we totally take care of this. We only feed at a distance from areas where there are residents living or where people usually gather. Also, we feed animals in steel plates that we carry back home, so it should not be an issue of spreading garbage on road as humans have already been spreading enough!

Unfortunately, there is very less awareness on the topic of animal rights, animal protection, and stray animal welfare in Diu, so soon we’ll share a video including all rules and laws Indian government has made for street animals, their protection, and for protection of animal lovers.

I hope, we’ll soon be able to create enough awareness regarding animal welfare and animal rights in Diu and we wish to see a more compassionate Diu in coming future!

“The greatness of a nation and its moral progress can be judged by the way its animals are treated.” ― Mahatma Gandhi

“Animals are such agreeable friends―they ask no questions, they pass no criticisms.” ― George Eliot

“Animals are the bridge between us and the beauty of all that is natural. They show us what’s missing in our lives, and how to love ourselves more completely and unconditionally. They connect us back to who we are, and to the purpose of why we’re here.” ― Trisha McCagh

We should be kind to every kind and not only human kind.

Kindness is the biggest religion!

Why to buy while homeless die!

Tips for the First 30 Days of Dog Adoption

By Shivangi Goyal*Some animals live their lives without knowing love, while others are saved from terrible situations before it's too late. Now the good news is you have made a decision to adopt a dog and bring a difference in its life. Bringing home a shelter dog...
Read More