The Power Of Love In A Pandemic 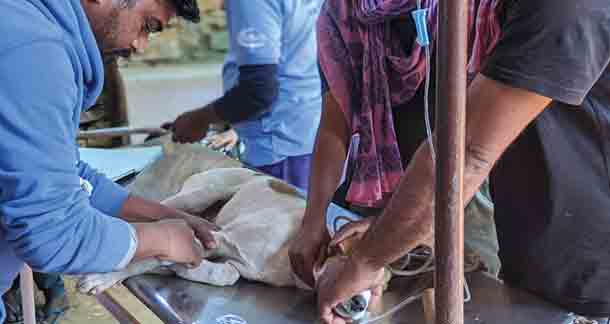 Running an animal charity is hard work at the best of times. Throw in a global pandemic and the Tree of Life for Animals (TOLFA) charity in Rajasthan found itself facing a whole new level of challenge.

TOLFA is a busy veterinary hospital and animal shelter based near the city of Ajmer and the holy town of Pushkar. It rests in a rural location between the two places, enjoying a beautiful position among the ancient Aravalli hills. Dedicated to the rescue and care of street animals, TOLFA also runs a rabies and sterilization project, a free clinic for working animals of the rural poor, education programmes, and a pet owner clinic. Donations from owners help to fund the low income/ownerless animal projects. The clinic is well regarded for its high level of quality and care, and it has been known for owners to bring their pets from 50–80kms away. The hospital can have up to six hundred animals under its care at any one time. TOLFA’s rescue ambulance is on the road day and night, answering calls from the public about sick and injured animals.

At the start of 2020, the charity was still recovering from an extremely testing couple of years. Two horrendous monsoons had seen parts of the hospital submerged under water, facilities and equipment damaged, and TOLFA’s life-saving services affected. Then in March came COVID 19. International travel stopped and a national lockdown in India shortly followed…

TOLFA was yet again thrown into crisis mode. Shops were closed and food supplies and deliveries suspended. With scarcity in food availability, prices were driven up; at the same time, the hospital had to close its gates to visitors. Donations, which make up a large part of TOLFA’s funding, virtually dried up overnight. At one particularly perilous point, the charity only had enough food to feed its vulnerable charges for a week. An appeal was put on social media asking for people to help. The response was incredible and after a very worrying few days, rice, dahl, green grass, and milk was donated by kind locals, while packages from TOLFA’s Amazon Wishlist started to arrive from far and wide.

Survival on the Streets

Out on the streets also, the TOLFA teams were facing a dire situation. Many of TOLFA’s services had to be temporarily suspended and the rescue ambulances were only able to attend to emergencies. With the country in lockdown and a lack of people or food on the streets, many animals were in danger of starvation and injuries from fighting over food sources, with older and more vulnerable dogs especially at risk. As well as still attending to sick and injured animals, TOLFA’s staff went out on the streets on feeding missions, often putting their own personal safety at risk. As key workers deemed to be providing an essential service, our hard-working teams still faced constant police check points and roadblocks, but the focus was clear: ‘The work goes on.’

Since those early dark days of the pandemic, things have improved slightly and TOLFA has been able to reopen most of its services. For now, facemasks and social distancing have become a way of life, which is not the easiest to do in an animal charity. But as the saying goes, the worst of times brings out the best of people. Last year, despite the pandemic, the team still managed to help and treat nearly 25,000 animals – amazingly over a thousand more than in 2019. TOLFA’s fifty-strong team has worked tirelessly around the clock, constantly rising to each new challenge and showing resilience that is both inspiring and incredible. The charity’s work has also been helped by the rise of caregivers and compassion in local communities towards ownerless animals, which is testimony to TOLFA’s hard work over the years raising awareness of animal welfare.

With vaccinations now being rolled out across the world, we can all look to the future with hope, and the day that ‘normal’ life can resume. In the meantime, life goes on and animals still need help. TOLFA continues to grow evermore and add more branches to its tree of life. Last year’s developments included building a new puppy quarantine block onsite. The next significant project is opening a new veterinary nurse training school in the city of Ajmer, with a focus on encouraging more women into the profession.

The pandemic has tested TOLFA to new limits but the charity has risen to the challenge, helped along by the generosity and love from benefactors and supporters. TOLFA’s motto is ‘Healing from the heart’ and they live this message every day. Love and compassion is at the centre of everything they do. Even a global lockdown didn’t stop TOLFA from keeping its heart open to helping animals in their hour of need.

With travel and face-to-face contact restricted at the moment, TOLFA’s normal fundraising streams are severely limited. Could you help from afar instead? The smallest of donations can make the biggest difference. To find out more please visit www.tolfa.org.uk You can also donate via Razorpay https://rzp.io/l/TOLFA to support the amazing animals and incredible work that goes on there and buy dog and cat food and puppy milk via their Amazon Wishlist http://www.bit.ly/TOLFAWish

Whilst the world became a slower, quieter, and lonelier place in lockdown last year, it is understandable why many chose new companionship in the form of a furry friend. Unfortunately though, many non-registered and inexperienced people began breeding puppies and selling them at extortionate prices to capitalize on the demand, without little thought for the long-term commitment required. Puppy farms have also been producing pups of various breeds at an alarming rate and this has raised further concerns about the worsening of already poor conditions for mothers and pups. Very sadly, as the ‘lockdown puppies’ grew and restrictions lifted and people returned to work, rescue shelters began to see an influx of sick and abandoned pets. Desi (Indian street) pups are affectionate, loyal, low-maintenance, and resilient and TOLFA always encourage adoption of a street puppy first.

‘A world where animals live free from disease and are valued as our equals.’

*Jo Carnegie is an author, writer and TOLFA ambassador. She is a passionate animal lover and the proud owner of Effie, a scruffy Jack Russell/Bichon cross (Jack-Chon). Instagram: @jocarnegie1