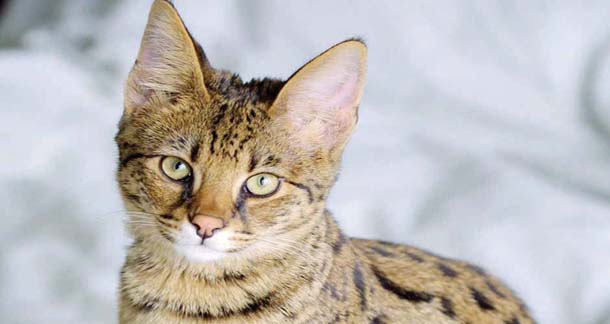 If wild is what attracts you to cats, then Savannah cat is the one to be considered. It is created by crossing African Servals with domestic cats and then breeding the offspring to cats such as Egyptian Maus, Oriental Short-hairs, Savannah’s, Ocicats and others. Developed to give the impression of grandeur and dignity of a wildcat with a cheetah type appearance, its expressive eyes highlighted by dark tear stains, vibrant coat colors, solid contrasting black spots, huge sonar-like ears and long legs, never fail to impress the viewer. 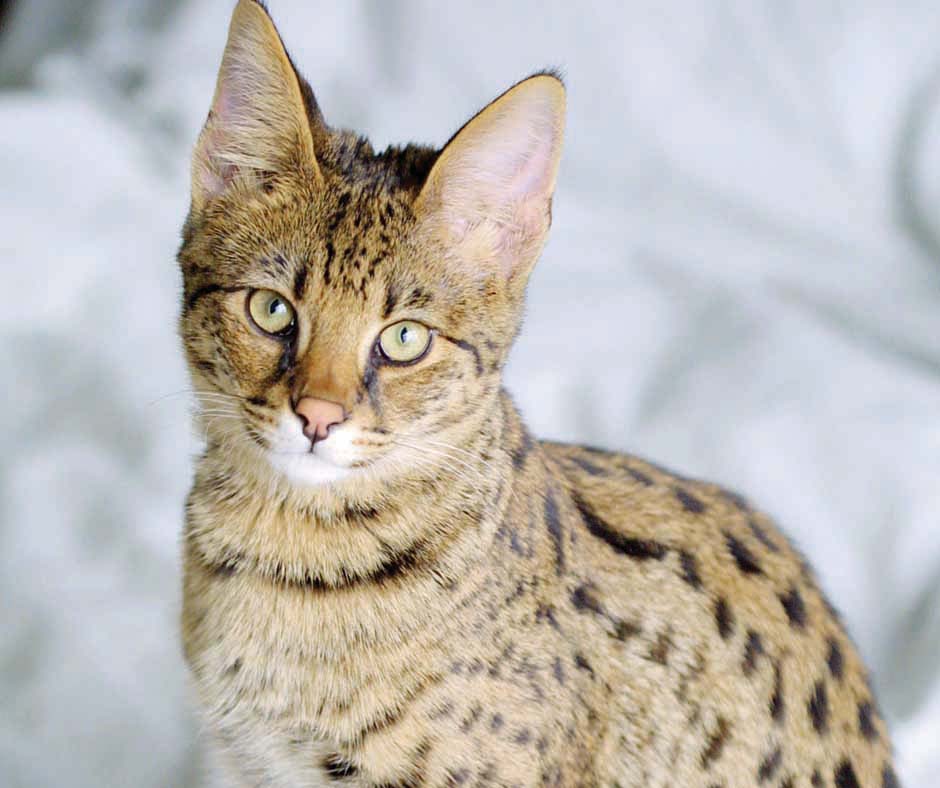 This cat stands out for its large pointed ears. The Savannah is a relatively new breed that was recognized by The International Cat Association in 2012 and Since 2006 it has held The Guinness Book World Record for the World’s Tallest Domestic Cat. The Savannah is an active and a confident cat which enjoys interacting with humans and other cats. Intelligent and curious, the Savannah Cat is always looking for adventure. The more adventurous life gets for it, the healthier it lives.

If you are a Savannah owner, you must provide it with plenty of tough, sturdy toys and frequent play-times, else, you will probably discover the destructive side of it. The goal of the breed is to obtain a well-rounded temperament, yet full of wildness , which makes it a suitable alternative to an exotic pet.

It is often mistaken for Bengal cats because of the poorly developed blood line, But they have totally an opposite body structure.

In the early days of 1990, domestic out-cross had greatly impacted the desired and non-desired development traits of cats. Most breeders perform Savannah to Savannah pairings because out crossing is considered less than desired and there is no longer out-crosses required for Savannah breed. That is because TICA championship status for it has been achieved.

A Savannah’s exotic look is often due to the presence of many distinguishing characteristics such as various color markings; tall, deeply cupped, wide, rounded, erect ears; very long legs; fat puffy noses, and hooded eyes. The body of Savannah appears long and leggy when it stands. Its hind-end is often higher than its prominent shoulders. Its small head can be called taller, rather than being considered wide and it has a beautiful long, slender neck. The back of the ears have Ocelli, a central light band bordered by black, dark grey or brown; giving an eye-like effect. Its short tail has black rings, with a black tip.The eyes are blue as a kitten, and may be green, brown, gold or a blended shade as an adult.The eyes of Savannah are boomerang in shape, with a hooded brow to protect them from harsh sunlight.

Savannah cat is known for its loyalty and it will follow its owners all around the house. It can be trained to fetch and walk with a leash. It is reported to be a very social and friendly creature with new people and other dogs and cats as well. While some may run and hide or revert by growling and hissing when seeing other stranger, Savannah does not have any such inhibitions in meeting new people. The key factor in sociability as Savannah kittens grow up is exposure to other people and pets. The most-noted trait of the Savannah is its ability to jump, they jump on top doors, refrigerators and high cabinets. It can leap about 8ft high from a standing position. It is very inquisitive and learns how to open doors and cupboards. Anyone buying a Savannah will likely need to take special precautions to prevent it from getting in into troubles such as injuries from iron nails or any open sharp objects kept in the environment.

There are three basic factors that affect the character of the Savannah cat behavior: Lineage, Generation and Socialization. If a bred line has a tendency for a specific behavior over other behavior, it is likely to be passed to the breed lines of the offspring.

Laws governing ownership of Savannah cats are different in different countries, for example- some states in United States have restrictive laws on hybrid cat ownership, including Hawaii, Massachusetts, Texas and Georgia, but Savannahs are more than five generations from the serval, hence they are allowed to be owned in New York states, but not in the city of New York. The Australian Federal government has banned the importation of the Savannah cat in Australia, as the larger cats could potentially threaten species of the country’s native wildlife which usually are not threatened by smaller domestic cats. Savannah cats are legal in every province of Canada, although some provinces have restrictions on the ownership of F1 and F2 generations and importing from United States requires rabies vaccination and special permits. In India, the law is that no animal shall be domesticated who’s natural home is forest within the geographical boundary of India; in other words Savannah can be domesticated here.

Savannah cat is known for its loyalty and it will follow its owners all around the house. It can be trained to fetch and walk with a leash. It is reported to be a very social and friendly creature with new people and other dogs and cats as well

Physical Attributes The Egyptian Mau is a long cat although she tends to be medium in size, with the males larger than the females. The Mau is heavily muscled and strong. A wedge-shaped, but soft head sits atop her muscular body. The forehead features an “M” shape,...
Read More

Having and watching a ragdoll cat growing up is heavenly… every cat lover would know! This gorgeous, gentle, and luxuriantly coated cat breed lets you cuddle her just like a doll. It could be an excellent companion for your whole family. Want to know why? Here’s the...
Read More

One of the most recognized and adored felines, who enjoy a calm and relaxing environment; it is hard to resist the charm of a Persian Cat! They are the happiest when at home and will greet you at the door when you come home after a long day. They are neither needy nor...
Read More

If you have a Maine Coon Cat, you won’t miss having a dog! The Maine Coon’s behaviour and loyalty are particularly doglike for a cat. Despite having relaxed and laid back attitude, they are not overreliant but are people oriented. This breed may appear intimidating to...
Read More

The most common breed in India is the Indian Billi, which adapts well to the country's climatic conditions. According to historical documents, the Indian Billi is a quiet and friendly cat breed that originated in Sri Lanka and India. It has a long tail that is darker...
Read More