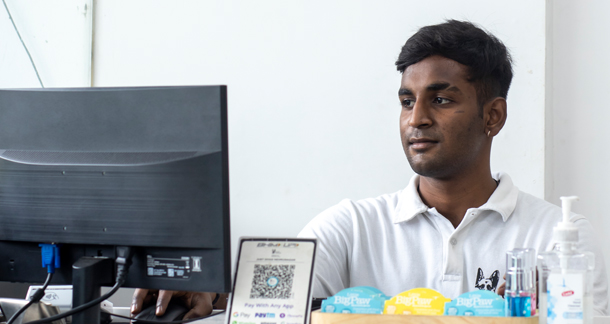 Govindnath Jogi, a cook not by choice but by chance… married to Tulsi Ben at the age of 15, from a small town called Salumbar, which is about 90 km away from Udaipur, Rajasthan.

With fewer options to make a living in a small town, Govindnath left his wife behind and moved to Ahmedabad in search of a new life, a new beginning, truly hoping to transform his life in the years to come, not just for himself but for his family.

He had to start somewhere and he embraced what came his way. He started working with a home tiffin service provider where he started by delivering tiffins, because of his attitude to progress in life, he requested his owner to get into the kitchen to learn cooking. He started off by making rotis and later worked his way up to become a cook which earned him a little less than enough to bring his beloved wife to Ahmedabad to start a new chapter in their life.

Dinesh Jogi and Jai Jogi are two little boys of Govindnath and Tulsi Ben. Govindnath is now self-employed as an independent cook who works in selective client’s homes.

In pursuit of transforming his and his children’s lives, he ensured he worked every single day of his life, to earn enough to provide basic education to his children and a home for his family. Dinesh and Jai, two young and well-mannered boys truly understanding the reality of life and the hard work put in by their Father, ensured their Father’s efforts are not wasted.

Dinesh after successfully completing his schooling enrolled himself in Bachelor’s of Commerce in distance learning. Apart from his studies, he ensured he was the helping hand for his Father. Dinesh was doing a few odd jobs and along with his father, managed to save some money, invested and managed to start a catering business. 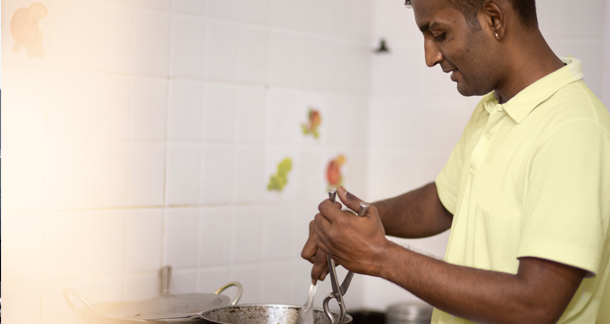 The catering business was set to scale up to be potentially a successful business, especially in a city like Ahmedabad. Just then came March 2020 which put the entire humanity as a whole in misery and unprecedented challenging times!

Unfortunately, due to the pandemic and its restrictions, not many people felt safe having a cook visiting them and at the same time, neither did Dinesh and his Father’s catering business took off. But fortunately, one of the houses where Dinesh’s Father worked as a cook belonged to Mr Ashish Anthony, the Founder & Director of JUST DOGS.

Mr Ashish Anthony works till late, so his nights are longer than his day which worked in Dinesh’s favour as one day, during his brunch time before getting to the office, he noticed a young, bright, talented, efficient boy rolling rotis in his kitchen. When enquired, it was discovered that Dinesh’s Father is unwell and he is filling in for his Father. When Mr Ashish Anthony got to learn more about Dinesh and his journey to his kitchen, Dinesh’s fate had its own plan.

Known for his quick decisions and knack of identifying talent at one glance, one phone call was all it took to change Dinesh’s life when Mr Ashish Anthony made that call to his father.

It’s been over a year since that phone call happened and now Dinesh is the Assistant Manager in India’s first cat exclusive store of JUST DOGS in Ahmedabad.

Dinesh started his journey with JUST DOGS as a delivery executive, became a frontline warrior by delivering zero contact delivery of pet food and pet supplies to needy pet parents in Ahmedabad. Due to his willingness to learn, grow in life, progress and truly complete what his father intended to do for his family when he left his small town 23 years ago – to transform his life!

JUST DOGS trained Dinesh on products, nutrition, pet behaviour, retail, customer service, management, effective communication, personal grooming and English language. Within the next six months, he was pushed to be a store executive managing sales and the store. For the next six months, Dinesh empowered himself and with the guidance and constant hand-holding from JUST DOGS Management, he went onto manage the store on his own!

From 1st of August 2021, Dinesh is promoted as the Assistant Store Manager of JUST DOGS! Constantly, learning and growing every single day. He is very well set on a successful and thriving career with JUST DOGS!

Dinesh is now a commerce graduate and under JUST DOGS scholarship, he is enrolled to study MBA in Retail Management along with his growing successful career. Dinesh is a fantastic cook; he cooks mouth-watering and delicious Gujarati, Rajasthan, Punjabi, South Indian and Chinese food.

Transforming lives is no one man’s effort, but a synergy that works together with every aspect of life at the right time, at the right place and with the right person for the right reasons.

At JUST DOGS, it is ensured that we create the necessary environment to Transform Lives!