Meet Tuffy, our Pet of the Month! Anyone could get bowled over by his sassy looks, innocent antics, and over dramatic mood swings. Priyanka, his bestest buddy, walks us through the wonderful journey of this cutest ball of love. “The Love of My Life”

I always wanted a dog when I was little and after convincing my parents for a few years, we got Tuffy. Baby Tuffy’s first day with us was very blissful – little one was tired from a long journey, but he was just too excited to be resting! All he wanted to do was play and pee everywhere. Tuffy wakes up early in the morning to go for a walk and his rest of the day is filled with lots of hugs, rides, cuddles, naps, walks, and games; he loves playing fetch. So with him, it’s like you can never get bored.

We pamper him with lots of love and toys, but just like every other doggo, all he chooses to give his attention to are the plastic bottles, slippers, and cushions. This little darling is very intelligent and understands everything but wouldn’t listen to anyone; apart from his smart looks he is all dramatic and moody. Tuffy has been friends with all the streeties in the area. Whenever we take him out for a walk, he sniffs everywhere and marks his territory. He is a part of the street gang now! 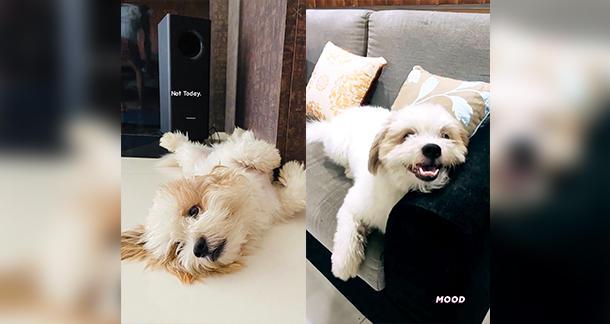 He just adds up all the sparkle, everywhere he goes! He always gives me something positive to focus on, which distracts me from my difficulties. He brings so much joy into my life!

Having a pet is such a weird feeling; like neither of you speak each other’s language and yet you form some strong bond by rubbing against each other and sleeping together. You might accidentally kick them in their face and step on their tail once in a while, but at the end of the day, you are two best buddies from entirely different species.

He just loves me and is crazy about me. His hobbies pretty much include sleeping or doing whatever he likes. He loves to get treats in the morning; it’s like his breakfast in bed. Also, when he is clumsy or dicey about going out, he would pee on curtains and would pretend as if he has done nothing wrong. Going for a walk and adding too much drama to our lives are his favourite things to do. This little one adores his father a lot and can’t go a day without him. He just keeps waiting for him to come back from work and give him all the cuddles and love.

Tuffy is the cutest ball of love. Apart from his sassy looks, this little darling is all dramatic and unpredictable. He has 24 different moods for 24 hours of each day, but he deserves all the love in the world. This little one is all fanatical about going on midnight walks and drives. He has many friends in our society. His favourite pass time activity is to shoo pigeons away. His nickname is “Boo-Boo.”

Meet our Pet of the Month Posto - She is a fighter, she is truly an inspiration, who taught Puja, her bestie, how to live life to the fullest and without any regrets. Here's Puja, sharing her story with us...Hi! My name is Puja and I'm from Durgapur, West Bengal. I...
Read More

Our ‘Pet of the Month’ Oreo is someone who changes forms like a Chameleon – sometimes an adorable golden wonder and sometimes a professional dog model, sometimes a cute innocent pup who amazes his parents with his antics and sometimes an impeccable dog influencer who...
Read More

Here’s our ‘Pet of the Month’ Chulbul – a wonderful surprise that Bhavya got on her birthday. She can’t forget that day when this little wonder came in her life and made her complete. Chulbul truly lives up to his name – playful, exuberant, high-spirited, and...
Read More