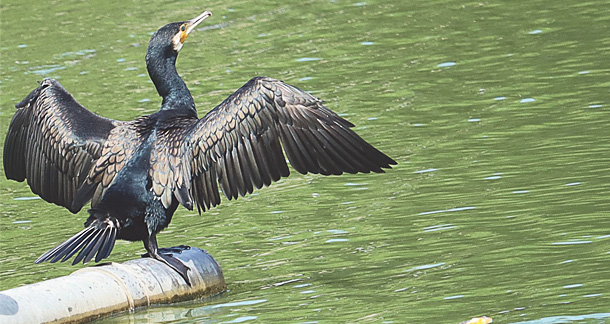 Water birds are a large and varied group of birds. Most are ritzy to fresh water sources such as rivers, lakes, dams, and wetlands; however, many sea and shore birds like cormorants can also be regularly found in these places. 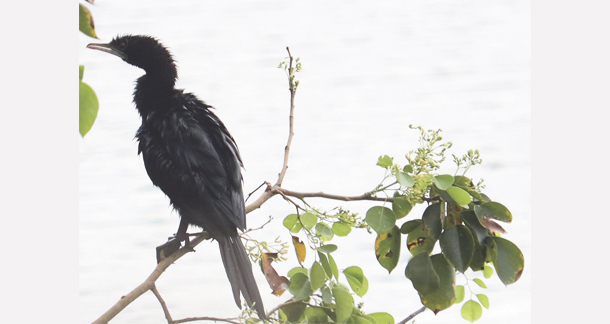 The most common misconstrue while identifying a Cormorant is that immatures typically have a contrasting white belly and are often confused with Indian Cormorants.

I was birding at a nearby lake in the early morning and I noticed that a few cormorants were trying to fish; I was fascinated to know more about the diving technique used by many traditional fishermen!

It is a traditional fishing method in which fishermen use trained cormorants to fish in rivers. They first tie a knot around the base of the bird’s gullet, release it into water where it catches fish, the fish gets stuck in the bird’s throat, and the keeper then pulls the bird back to the boat and dislodges its catch by putting pressure on its throat. The fisherman then gives it a small snack as a reward, much like a trained dog! It is said that one cormorant bird can catch up to fifteen kilograms of fish every day.

Once-profuse bird populations may have been decimated by urbanization but a recent study said that resident water bird population is on the rise; few say it is all because of rejuvenation of lakes and availability of nesting sites in islands enhanced by it.

I was at one such lake in Bangalore in the early winter, and there was a Spot-billed Pelican getting a charge out of the early morning sun! This particular species has declined at a moderately rapid rate owing to a number of threats. For this reason, the species is classified as Near Threatened. 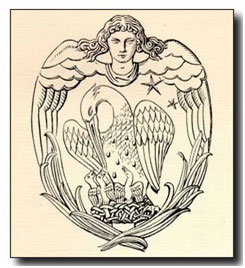 Pelicans are a symbol of empathy, nobility, and goodness. The given symbolic depiction of a mother pelican feeding the little ones denotes a legend originated prior to Christianity. According to the legend, the mother pelican, to save her babies from starving, wounded herself with the beak to feed them her blood.

Habitually Painted Storks and Pelicans make their way into lakes, rivers or sanctuaries in winter for breeding, mainly because they have a good vegetation cover supporting for arranging nests by avian guests.

I was fortunate enough to have a glimpse of Painted storks from close, less than 100 meters in a nearby lake.

Painted stork is an exclusive bird, whichever way you look at it; its glaring colours are strongly graceful when it’s in flight.

This bird is known to us as Painted stork, but the old name was Pelican Ibis by which it was known to us in early ornithology. If you stare at the bird, it suggests a very stunning kind of Ibis with a Pelican like beak, which inspired ornithologists back in the day to call it Pelican Ibis! 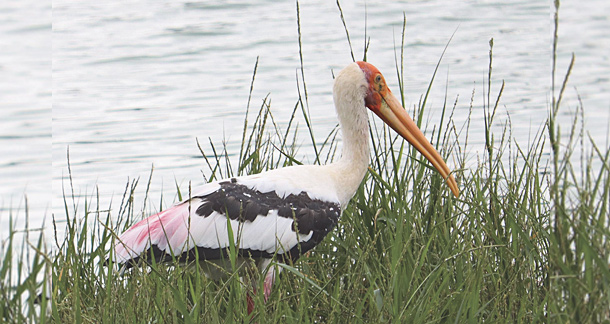 Asian Openbill is a large wading bird in the stork family. It is mainly found roosting in India and Sri Lanka. They occupy their entire native range all year round, migrating to specific destinations during the breeding season that is winter in India. If you take a close look at the bird, you will notice an unusual gap in its bill, which was specially adapted to allow the bird to feed on large snails. The cutting edges have a fine brush-like structure that is thought to give them a better grip on the shells of snails. Immature birds develop the gap after a while! 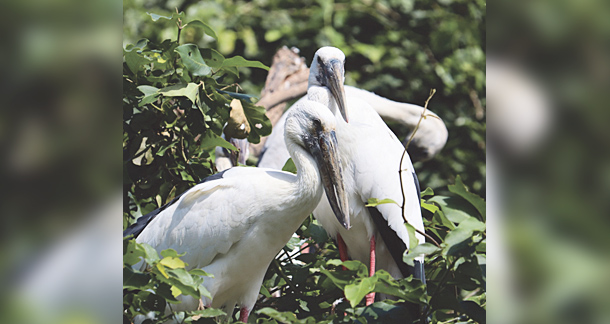 These birds are known to make movements depending on the availability of food and they live and nest in colonies. They build their nest on trees that do not spare them from their major predators – the eastern imperial eagle and steppe eagle. Flocks of the birds are often found on breeding and feeding grounds around their favourable habitat. The birds also share their nesting trees with little egrets and cormorants. Also, they are quite common around the regions inhabited by snails!!

The herons and egret bird species belong to the same family of Ardeidae, also the bitterns. Egrets are herons with white plumage, medium–large in size and also have different colour morphs varying geographically.

Indian Pond Heron is the most common species of heron found in India, and is very common in and around Indian cities. They have an excellent way of camouflage, usually feeding on fish and amphibians at the edge of ponds and marshy wetlands. They gather in large numbers where food is plentiful and are prone to seasonally local movements and vagrancy.

This species feeds primarily by Standing, either in or out of water or mud. It stands for long periods waiting for fish to come into its strike area. It also feeds by Walking, usually with extremely slow and stealthy steps. When Walking, it often uses Head Bobbing. It tends to use different behaviours in different habitats. It feeds by standing in marshes and other shallow water and walking along the shallow muddy edges of water bodies and in flooded pastures. 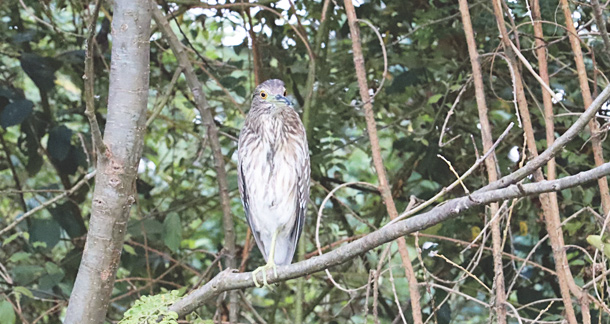 Is There a Difference between Little Egret and Great Egret?

If you notice, both the birds have a white plumage and are very closely related, which makes identifying them a difficult job for birders!

But, nothing is impossible in birding.  The Little Egret has a black beak, whereas the Great Egret has a long, thin, yellow beak that may become darker in breeding season. The Great Egret also has a fine black line from its beak to beyond its eye, which is usually not seen in Little Egrets.

Another appealing characteristic of Little Egrets is the two long feathers on the back of their necks during breeding season; however, this feature is missing in Great Egrets.

Herons are often seen standing as still as a statue on their long thin legs in shallow waters of ponds and lakes, patiently waiting for the fish to swim by. These tall birds spend most of their time alone, feeding mainly on fish, like seen in the first picture, but can occasionally fly as seen in the second picture!

More often than not, they are seen at ponds (stagnant water) to feed on fish. Make sure you look out for these incredible birds in flight, their slow-flapping wings and long legs held out behind make them hard to miss! 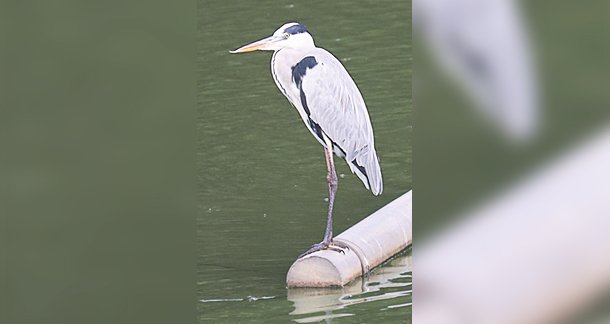 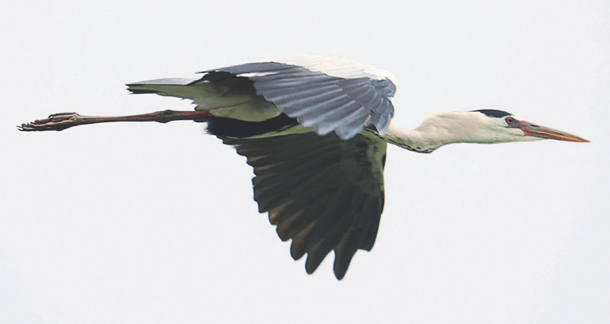 * Author is a mechanical engineering student residing at Bangalore. Interest in the nomenclature of birds made him an enthusiastic bird photographer and gave him all the patience in the world to wait for birds to show up. His birding life began at Ranganathittu Bird Sanctuary, where he got to interact with Ornithologists about migratory birds and a few fascinating facts. He has travelled many states to capture the beauty of birds. His bird species count is 71 and still counting…!

(DEV BHOOMI IN TRUE SENSE)   By Dr. Dilip Verma*Birders often have their eccentric wish lists before they set off on a pursuit. Some may want to see a gaggle of bar Headed Geese; some may want to chance upon their favourite and elusive—warbler. Others may wish to see...
Read More

Why I Choose a Bird Walk over a Jeep Safari

By Prabhat Verma*Yes, it may sound strange but many seasoned wildlife lovers have switched over to birdwatching from chasing big game that drew them to National Parks earlier. I am one of them. Guess it has something to do with choosing a laidback walking safari on a...
Read More

Who Owned the Morning Hues? Well, She Did.  ‘Red-Whiskered Bulbul’  A Story about a Mother Bird Red-Whiskered Bulbul  By Chandana Chandrappa* In our little urban garden, there was a Christmas tree. A bird couple came to visit our garden on a beautiful day. They were...
Read More

By Mustafa Adamjee aka The Kenyan Birder* Kenya is one of the most visited countries on the African Continent. Most visitors travel to Kenya for its spectacular Wildebeest migration and Luxurious beaches. But Kenya’s unique geographical range gives it a variety of...
Read More

By Dr. Dilip Verma* At times I used to wonder, will I ever witness a Common Tailor Bird building its nest? Well, this pandemic has given me the opportunity to get such a moment. With everything under lockdown, I got time to closely watch Common Tailor Bird and observe...
Read More