Animals In The Limelight In Year 2020 Claire, the Scottish Deerhound, bagged top spot at the National Dog Show 2020. Around 600 dogs participated in the show, which was hosted on November 14 and 15 and premiered on its television partner NBC. Claire defeated six other dogs who were at the top of their respective groups.

Bogie, the 11-year-old crossbreed dog from the Philippines, sure is one suave-looking canine, with an Easy Rider look that would earn him a place in any motorcycle gang. Bogie has become a neighbourhood celebrity and is a magnet for attention on mountain and beach road trips. He takes daily motorcycle rides with his owner Gilbert Delos Reyes, balanced perfectly with his hind legs on the edge of the seat and paws straddling the handlebars. 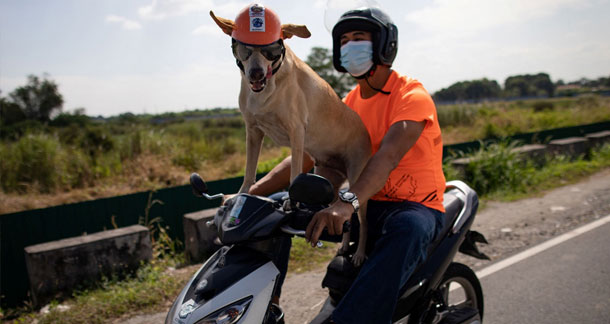 Belgian Shepherd Malinois Kuno, a military working dog received the prestigious PDSA Dicken Medal, the animal equivalent of the Victoria Cross, for his heroic actions in combat. He served alongside UK’s soldiers in Afghanistan and was part of an assault force raiding a compound in an undisclosed mountainous region when he charged through a hail of gunfire to bring down a gunman.

In recognition of Veterans Day, former President George H.W. Bush’s beloved service dog Sully was honoured with a bronze statue. The life-size statue was unveiled at the America’s VetDogs campus on Long Island. Sully the statue is shown in a sitting position, holding his leash in his mouth, a task that vet service dogs learn to perform for their handlers.

Pup MACKENZIE Awarded ‘The Most Heroic Dog In America’

MacKenzie, a four-pound Chihuahua, was named winner of the 2020 American Hero Dog competition on October 19, 2020. This annual contest is the brainchild of American Humane, the country’s first national non-profit dedicated to the safety and well-being of animals. Often called the ‘Oscars for dogs’, the prestigious award recognizes canines that make inordinate contributions to society. The ‘Most Heroic Dog’, pup      MacKenzie, despite her own struggles, always seemed more concerned about other animals in distress and is making the world a better place for humans and animals alike.

Rabbit Hash, Kentucky, has a peculiar tradition of electing canine candidates, and Wilbur, a 6-month old French bulldog, is the latest mayoral mutt. There have been five dog mayors of Rabbit Hash since the first, Goofy. The last mayor, a pit bull named Brynn, was mayor from 2016 to 2020. Wilbur is an American Kennel Club registered purebred dog. From 2017 through 2019, according to the American Kennel Club, the French bulldog has been the fourth most popular purebred dog breed in the country.

Eba helps orca researchers study the whales by tracking down their feces floating on the water. Her sensitive nose can detect the scent from a mile away. When the mixed-breed dog was just a few weeks old, someone dumped her outside of the Sacramento animal shelter in California. But after months of care, Eba pulled through. After several mishaps, including wandering away from her foster home, she was adopted by Dr. Deborah Giles, a killer whale researcher at the University of Washington Center for Conservation Biology.

Uggie, the Jack Russell Terrier, whose antics in Oscar-winning film ‘The Artist’ stole viewers’ hearts, was crowned Palm Dog of Palm Dogs, singled out as the best canine winner in the award’s 20-year history. Unfortunately, Uggie got diagnosed with prostate cancer and passed away in 2015 at the age of 13 years. In 2011, he received the Palm Dog award for best performance by a dog in a movie screened at the Cannes. He rose to fame after starring as French actor Jean Dujardin’s cute sidekick in the black and white film.

Skye, a Border Collie Canine, was working with the Lake District Mountain Rescue Searchdogs (LDMRS). Currently, Skye is 14-and-a-half-years-old and she is the oldest working search and rescue dog. She is owned by Mr. John Leadbetter, who also works with LDMRS. Doggo Skye served as a mountain rescue search dog for 11 years. Skye’s final search operation was on September 11, 2020 in which she helped find a woman along with the Kendal Mountain Rescue Team.

USA’s Virginia Tech has recently awarded its therapeutic dog, the eight-year-old Moose, the honorary doctorate degree in veterinary medicine, in its virtual graduation ceremony. The Labrador Retriever has been working with the university since 2014 and is one of the four dogs serving at the Cook Counseling Center. In a statement released online, the university said it was recognizing the work of Dr Moose Davis, who has ‘spent a career serving and supporting the university community’.

Vida of an Army Dog Unit located in Northern Command and Sophie of Special Frontier Force (Bomb Disposal Squad) were awarded with COAS Commendation Cards on the 74th Independence Day this year, for their role in different operations. Commendation Cards are given to dogs for good performance while performing the duty. ‘The Silent Warriors’ as the Army dog unit is fondly called have indeed proven to be an asset for the security forces.

Lewis Hamilton has revealed that his beloved bulldog Roscoe ‘is now fully vegan’ following the death of his other pet pooch.  The Formula One pro made the announcement on his pet’s Instagram page, which boasts more than 178,000 followers. Roscoe had been suffering from several health issues – similar to other flat-faced breeds like pugs and bulldogs, but Hamilton explained in the post that these issues have now been cleared after making the switch in his diet. Roscoe, whose parents are both champion show dogs, has previously found success as a model.

Doug The Pug is a dog living in Nashville, Tennessee, who has gained a large internet and social media following, and has reached the status of a ‘celebrity dog’. Doug the Pug was also the winner of the 2019 Animal Star Award! From meeting A-list stars to dressing up in fun costumes, Doug The Pug is living his best life. The adorable dog’s Instagram account is filled with pop culture references that may be part of the reason that he has amassed 3.8 million Instagram followers. The pup even has a book titled Doug the Pug: The King of Pop Culture.

Elwood, a ginger and white fluffy feline, stood outside the Epworth Hospital in Richmond, Melbourne, Australia for almost a year. He did so to obtain a job at this local hospital. He spent days hanging around the hospital while looking cute. The furry one finally managed to attract the employer’s attention and was taken on board. His role now includes greeting all those entering the hospital and in return, he only expects a pat. He has also been seen cheering staff and entertaining patients all over the hospital.

It’s been a two-year tradition to have a four-legged animal as mayor in Fair Haven. The honorary pet mayoral position began when the town decided to switch things up and use the position to help raise money to replace the community’s elementary school’s playground equipment, which is more than 20 years old. Murfee, a 3-year-old Cavalier King Charles spaniel, came out on top. Eighteen animals were on the ballot and Murfee took the win with 146 votes. He is a certified therapy dog who visits nursing homes, grade schools, and hospitals along with other dogs from the Caring Canines Therapy Dogs of Southern Vermont.

An Indian street dog that lost its front legs after being run over by a train has found a new home in Britain after enduring a year of therapy and learning to walk again with prosthetic limbs. The three-year-old mutt was found ‘covered in blood’ and her forelegs badly injured by a Railway Protection Force constable at Faridabad in northern Haryana. The officer carried the wounded canine – now named Rocky – to one of PFA’s shelters, where she was rushed to a hospital. As Rocky recovered – learning to use her chin for balance – the rescue organization released a video about her plight, which went viral on social media, attracting the attention of the global dog rescue group Wild at Heart Foundation. They pledged to find her a home, while an Indian national living in London paid for her new legs.

“Rocky is a very brave dog – even after going through trauma and losing both her legs, she’s displayed incredible resilience, strength, and spirit to live,” People For Animals India president, Ravi Dubey told AFP.