NEWTON : The Center Of Gravity Of Our Lives 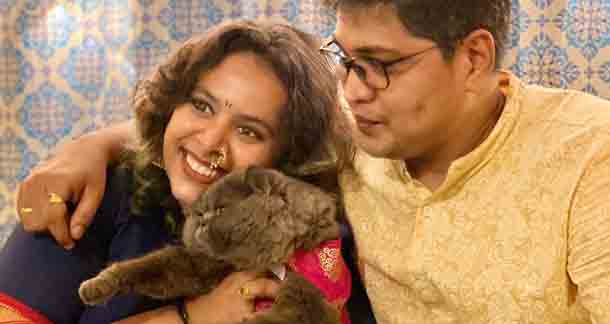 Being adopted as parents by Newton, we feel really blessed as welcoming this li’l fur baby has changed our lives for good.

We’ve always heard people say that cats can live by themselves but we don’t really agree to the same as Newton is more than a child to us and travels with us. He’s been travelling since he was 42 days old, which is very rare of a cat. He also loves dressing, socializing, and turning non-cat lovers to ardent cat lovers and parents.

Newton has changed our perspective about life; there are days when we’re stressed and he just sits on our shoulder and hugs our head.

He loves being with kids and hence loves travelling with us to our work places. He’s turned strict and rigid office spaces to fun and loving spaces with positivity and now if we don’t take him for a day, we get video calls at night from our friends just to look at him and talk to him.

He understands us better than what we understand ourselves. Hence, he’s Newton and our entire universe revolves around this li’l baby of ours!

Newton was adopted when he was 2.5 months old, we received an adoption call on the day of visarjan i.e. 12th September 2019, and he was born on the 11th. We without seeing his pictures or getting in any details about him just said yes as we thought he’s truly a blessing in disguise. We never knew anything about him in detail until we spoke to the people the next day, to know he was a Himalayan and Ragdoll mix and is up for adoption. Initially, he had health issues and couldn’t walk for the first few weeks, we were all worried about the same, but soon he started walking and was comfortable doing so.

He came home on Dhanteras and there’s something precious that’s always bought on that day, but we had a royal entry of a li’l four legged with a dancing tail coming inside the house to bless us two and making it a family of three. He walked into our lives when I was going through the worst phase of mental health issues and with him coming, truly it felt as if god sent him for a purpose. He used to sit by my side patiently, especially, during the age when such li’l kittens are full of energy to play and jump. When I was low, he just sat and at times purred sitting on my lap to make me feel better. If it wasn’t him I don’t know where I would have been now.

My husband and I, both used to take therapy sessions for kids, and Newton was one of the major reasons for why many kids could benefit through therapy. Very soon we plan to make him a therapy cat so that he could help many fight through and the main reason being, he loves to be around children and that keeps him happy.

*Author is Newton’s adopted mom. Along with being a cat mom, she is a social worker, a special educator, and a part of animal welfare since her childhood. She had her first rescue of a puppy at the age of 4, which lived with them for 15 glorious years. With Newton, it is her first experience of specifically being a cat parent. The pets her family has had till date had all been adopted.