Rescued And Loved! Now “Painted Like One Of Your French Girls.” Since man learned to draw in caves, dog portrait paintings have appeared to mark our bond and fondness for these animals. Animals have a significant impact on people, and there is no more remarkable act bigger than adopting an animal that deserves nothing but a loving home and a caring family. It is no wonder today’s pet parents love to celebrate their pets in various ways and would like someone to create a work of art featuring their furbabies.

Harshita Gakkhar, aka TheDoodleDidi, based in Jaipur, India, specializes in pet portraits in watercolours. She aims to capture the sweet bond between pets and their family members with her realistic pet portraits. Harshita is genuinely passionate about her art and the beautiful pets she is commissioned to paint. She is always thrilled to hear about each pet’s unique stories. 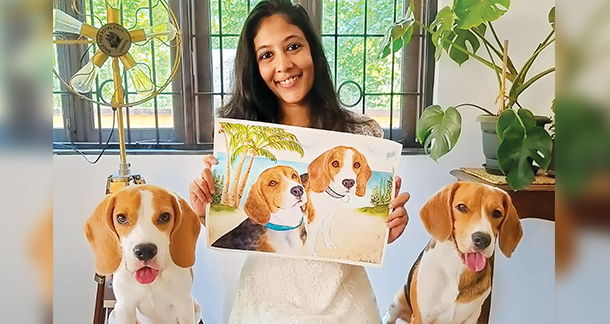 Sidharth and Shivani were both fond of dogs. When their moment came, they started looking to adopt a dog. They did not want to take the breeder route as they refused to look at it as a commercial commodity being traded. They firmly believe in adoption – human kids or dogs. Walnut was a homebred puppy housed by a family who didn’t have the time for his care and attention. After a few video calls and conducting some word-of-mouth background checks, they were chosen as the new family for Walnut. At 14 months, Walnut was the most playful little sweetheart – he stole their hearts on his first walk home.

After a year with him, they felt ready to adopt another dog. They started looking to adopt and had their hearts broken with a couple of rejections in the final moments, and after four months, they got a call. Donut came home! He came with a considerable stash of belongings that took two days to find space to store. Donut was a scrawny little pampered pup that would never get tired, and between Walnut and two humans, he outdid them all with his puppy-power energy.

A month later, they moved to Goa – to give them the life these puppers deserve. Almost a year here, the Nut Pack have only bonded like any other siblings – a balance of all things good and bad, learned and untrained and growing with it all.

Rescue isn’t a tag or a word; it’s a lifetime commitment. From their experience and learning, they believe and encourage people to adopt – mindfully and through the suitable NGOs and processes and make them a part of their family. Shivani says, “While we may have a lot of pictures with them, the essence of The Nut Pack’s bond was truly captured so beautifully By Harshita – TheDoodleDidi in the portrait she drew as a birthday gift for me by the Nut Pack’s friends. The realism of the painting is so magical – from the expressions that captured their personality, their coat colours so impeccable, and the placement of the two in their favourite place, the beach. This painting is a treasure for life.” Shiro was born on the streets of Mumbai. Due to the kindness of a few humans, including his momma, he was fed every day. One fine morning in January 2020, he met with an accident on the streets and was severely injured. Prajakta rushed him to the nearest doctor and was informed that Shiro would not survive. She didn’t take no for an answer and went to a specialist for another opinion. To her surprise and grace of God, Shiro started getting better, and she decided to bring him home! He met his new family, his grandmother, and his dad. Shiro turned out to be the naughtiest boy ever and was renamed Gunda Boy Shiro due to his antics. Now, he travels, eats wholesome meals, gets his belly scratched, gets pampered, and lives the life he deserves. Prajakta wanted to celebrate his presence in her life with a custom portrait. She said, “TheDoodleDidi is amazing! How she painted my Shiro with love and captured every detail made me speechless. It was the best decision to commission Shiro’s portrait. Anybody who visits us appreciates the painting a lot.” Nikita found Luna abandoned at a construction site during her morning walks with The Buddy Bella Gang in July 2021. Luna was a 2-month-old Labrador puppy with a limping leg. It was pretty clear she was a Breeder discard and was left alone to die in this cruel world. Nikita brought her home and decided to foster her until Luna’s leg recovered. Nikita was over the moon when her Aunt proposed to adopt Luna. But, Universe had other plans. Nikita’s other rescue, “Bella”, got fond of Luna. Everybody, including Nikita, got attached to Luna so much that when the time arrived to finally send her to her forever home at her Aunt’s farm. She decided to keep her forever. So now BuddyBella Gang has not 1 but 4 dogs. Luna brought so much life into their lives. As if it was written in the stars and she was finally home. Nikita commissioned a portrait of Luna and wanted to add flowers around her painting to depict her colourful personality and said, “Thank you, Harshita, for painting my mad child so pretty! You have a gift” 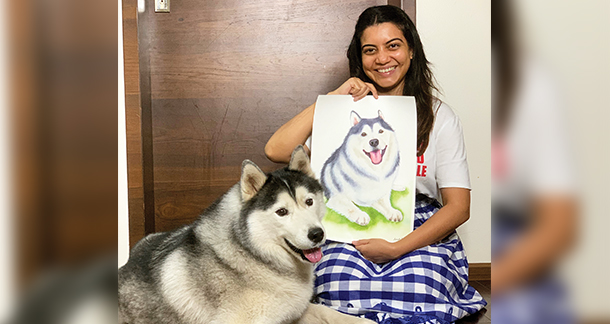 Prajakta and Awadhesh had applied to a rescue organization looking to adopt a dog and complete their family. They soon got an emergency adoption notice for a Siberian Husky, age unknown, that was found wandering the streets by himself. He had visible wounds and a large tumor near one of his limbs. Martin was abandoned, sick, and abused. He was in urgent need of medical attention. To make things worse, it was summer, and the rescue organization did not have a sufficiently cool space for him to make things worse. They went to the shelter the next day, and Martin came walking to them immediately with a look of “Where have you been, mum and dad?” on his face. He hadn’t done that with other people who had come to see him that day. The volunteer was very happy to see Martin’s reaction to them and decided to send him home with us then and there. Once home, they got him medical help. The rescue organization was able to find Martin’s original owners and lodge a police complaint against them. Their poor puppy had been locked up in a small cage his entire life, left to be ignored and only to be beaten if/when he barked. One day after Martin fell sick, the original owner had had enough, and Martin was left in the streets. Martin is now recovered and is the naughtiest member of their little family. They hope we bring him at least a tiny part of the amount of joy he brings to our lives every single day.

Prajakta says, “Pictures are a widespread way of celebrating Martin’s life, but we wanted a special way of celebrating for our special boy. That’s when I found and contacted Harshita on Instagram. She painted the most beautiful portrait of Martin that captured all the little details perfectly; my favourites, one of his ears tilted a little back and his cute side-eye! We’ve hung it on a wall in my house that celebrates all things sentimental and important to us. Thanks to Harshita, Martin will forever be at home.” Zoey: The Dog whose Legs are Broken but Her Spirit is Not!

Over Five hundred wonderful pet parents have chosen Harshita to capture their furry babies through her art in the past three years. She hopes by using her skills and hard work; she can create treasured gifts and memories for all pet parents.

*Author is a watercolour artist based in India. She is a management professional and currently works as a product marketing manager in a prolific startup based in New Delhi. She enjoys travel, reading, and stand-up comedies. You can get in touch with her at thedoodledidi@gmail.com or on Instagram @thedoodledidi

By Raj Mehta“Each of us has been designed for one of two immortal functions, as either a storyteller or as a cross-legged listener to tails of wonder, love, and daring. When we cease to tell or listen, then we no longer exist as people” ― Bryce Courtenay  Do you like...
Read More

Chirag Dharmani* There are various genres in Photography but Pet photography is one of the toughest genres to deal with. Shooting with pets comes with its own pros and cons and there are a few things that need to be considered before shooting with pets. Pets are a...
Read More

For the Love of Dog – Pet Photography In India

By Pragalbh Vashishth* Our family was complete 11 years ago when we welcomed our dog, Laika, to our lives. I still vividly remember the first road trip with her. There was an extra suitcase, extra snacks, and a whole lot of extra planning to make sure we don’t leave...
Read More