“The dog is the perfect portrait subject. He doesn’t pose. He isn’t aware of the camera.” – Patrick Demarchelier 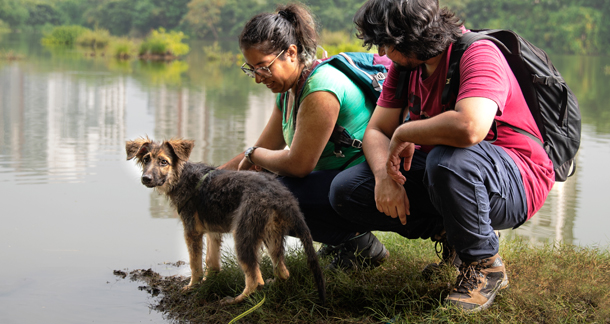 I have always loved and preferred shooting outdoors. Living in a busy city like Mumbai, cooped up in apartments, I advise taking dogs for outdoor excursions. So when, as a part of Gabbar’s outdoor training we decided to go on a trek and visit the beach I suggested turning it into a photoshoot. We decided not to waste this beautiful opportunity and planned a photoshoot, which had no other agenda than enjoying and making memories.

Gabbar is a very well-behaved German shepherd whom I have helped train. At the time of trek, Gabbar was a puppy with a quirky, curious personality. Being a trainer, it now comes naturally to me to pick on personalities and deeply understand the bond that the humans share with their dogs.

Our first outdoor was a guided trek by Gooddog services meant for dogs and pet parents. Since, Gabbar was still a puppy we put him on a long leash and then let him be. In just few minutes of starting the trek, we came across a pond. This was the first time Gabbar was seeing a large water body. I got my camera ready and positioned myself to click all the antics that were going to follow. He was hesitant to enter the pond but we let him take his time.

Clicking dogs when they are being themselves always has the best results. I was still discovering my style then and realized that I love picturing dogs and emotions from the viewpoint of the dog – watching the world the way a dog would; capturing emotions that a dog feels for his human.This shoot was about Gabbar and his life.

Gabbar would approach the water but not step in. Forcing him in the water to play would have stressed him out and then the whole trek he would have been anxious. This would mean an unhappy nervous dog, which would not be a memory you would want to look back at. Dogs express a lot through their eyes, mouth, and even ears. Many emotions can be shown through ears like if Gabbar was forced in the water, I would have many images with ears pinned back. As a pet photographer you have to be aware of such situations; read dog’s body language; keep yourself, the pet parent and the dog calm and happy; and try to turn a bad situation around. So, naturally, I used this opportunity to click a lot of portraits.

Since, it was their first trek together there was a lot that both, Adrija and Gabbar, were learning about each other. There were many memorable moments – Gabbar playing with a little stick, staring into the abyss, barking at water, and even blowing bubbles in water.

Treks are also good training opportunities. Gabbar did go out of sight but would always return back to check upon us without us calling him back. This highlighted the bond that Adrija and Gabbar have. Towards the end of the trek, we took a break on the banks to enjoythe view. This meant we could get shots of tranquil moments shared by Adrija and Gabbar. While returning, Gabbar seemed tired so we each took turns picking him in our arms. But as soon as we reached the spot where he refused to jump inwater, he somehow regained energy and had a nice playful session that lasted a good half an hour. The innocent face he made during the time we had to pick him up was all just a facade.

Sometimes it’s okay not to plan the shoot but tell a story by immortalizing the moments that are made and shared.

Few days later, we went to the beach. Luckily, there were few people since we reached the beach way early in the morning. Gabbar enjoyed playing with the frisbee and chasing crows. I got him to pose for me and his cuteness was oozing out of him.

I have seen this puppy grow into a beautiful strong dog. It takes only months for puppies to grow into dogs.I have been in awe of dogs forever and they still surprise me by their varied personalities.I am glad I was there to photograph his journey.

Being a pet photographer means you have to be always ready, have an insane timing, understand dog behaviour and love dogs. The best pictures are usually candid. There is very little posing that the dogs can do, unless they have been taught to pose on command. An occasion-based shoots are always fun but so are celebrating life! These are the memories that everyone cherishes for life. It’s sad that dogs have such a short life span and that we will not have the privilege to get their love throughout our life. So why wait for an occasion when you can celebrate each moment, each first time with your dog.

We have very little time with our dogs, so cherish and savour every second of it.

“The dog lives for the day, the hour, even the moment.” – Robert Falcon Scott

*Author is the owner, certified dog trainer, and pet photographer at LooneyTails. She has done an MBA in Finance and left her corporate job to pursue her dream of working closely with dogs. She founded LooneyTails in 2018 with the aim to strengthen the bond pet parents share with their dogs. She is a self-taught photographer, who wants to immortalize the magic that a dog creates in a pet parents’ life. You can visit her website www.looneytails.com and Instagram handle @looney_tails